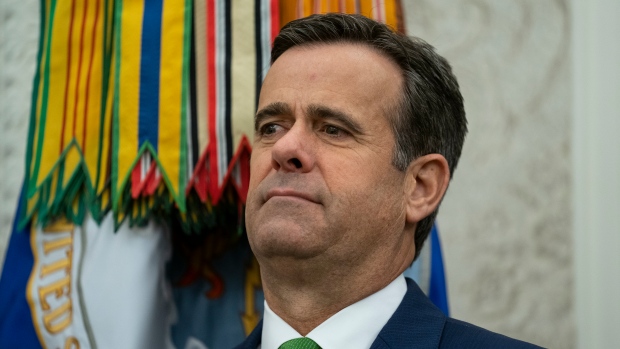 WASHINGTON - China poses the greatest threat to America and the rest of the free world since World War II, outgoing National Intelligence Director John Ratcliffe said Thursday as the Trump administration ramps up anti-Chinese rhetoric to pressure President-elect Joe Biden to be tough on Beijing.

“The intelligence is clear: Beijing intends to dominate the U.S. and the rest of the planet economically, militarily and technologically,” Ratcliffe wrote in an op-ed published Thursday in The Wall Street Journal. “Many of China's major public initiatives and prominent companies offer only a layer of camouflage to the activities of the Chinese Communist Party.”

“I call its approach of economic espionage `rob, replicate and replace,”' Ratcliffe said. “China robs U.S. companies of their intellectual property, replicates the technology and then replaces the U.S. firms in the global marketplace.”

Trump administration officials have been stepping up their anti-China rhetoric for months, especially during the presidential campaign as President Donald Trump sought to deflect blame for the spread of the coronavirus . On the campaign trail, Trump warned that Biden would go easy on China, although the president-elect agrees that China is not abiding by international trade rules, is giving unfair subsidies to Chinese companies and stealing American innovation.

The Trump administration, which once boasted of warm relations with China's President Xi Jinping, also has been ramping up sanctions against China over Taiwan, Tibet, trade, Hong Kong and the South China Sea. It has moved against the Chinese telecoms giant Huawei and sought restrictions on Chinese social media applications like TikTok and WeChat.

China's embassy in the U.S. did not respond to a request for comment on Ratcliffe's op-ed, although China has routinely denied many of these allegations in the past.

Ratcliffe, a Trump loyalist who has been accused of politicizing the position, has been the nation's top intelligence official since May. In his op-ed, he did not directly address the transition to a Biden administration. Trump has not acknowledged losing the election.

Ratcliffe said he has shifted money within the $85 billion annual intelligence budget to address the threat from China. Beijing is preparing for an open-ended confrontation with the U.S., which must be addressed, he said.

“This is our once-in-a-generation challenge. Americans have always risen to the moment, from defeating the scourge of fascism to bringing down the Iron Curtain,” Ratcliffe wrote in what appeared to be call for action to future intelligence officials.

Biden has announced that he wants the Senate to confirm Avril Haines, a former deputy director of the CIA, to succeed Ratcliffe as the next national intelligence director.

“This generation will be judged by its response to China's effort to reshape the world in its own image and replace America as the dominant superpower,” Ratcliffe wrote.

He cited several examples of Chinese aggression against the United States:

The Justice Department has charged a rising number of U.S. academics for transferring U.S. taxpayer-funded intellectual property to China.

He noted the theft of intellectual property from American businesses, citing the case of Sinoval, a China-based wind turbine maker, which was convicted and heavily fined for stealing trade secrets from AMSC, a U.S.-based manufacturer formerly known as American Superconductor Inc. Rather than pay AMSC for more than $800 million in products and services it had agreed to purchase, Sinovel hatched a scheme to steal AMSC's proprietary wind turbine technology, causing the loss of almost 700 jobs and more than $1 billion in shareholder equity, according to the Justice Department.

Ratcliffe and other U.S. officials have said that China has stolen sensitive U.S. defence technology to fuel Xi's aggressive military modernization plan and they allege that Beijing uses its access to Chinese tech firms, such as Huawei, to collect intelligence, disrupt communications and threaten the privacy of users worldwide.

Ratcliffe said he has personally briefed members of Congress about how China is using intermediaries to lawmakers in an attempt to influence legislation.