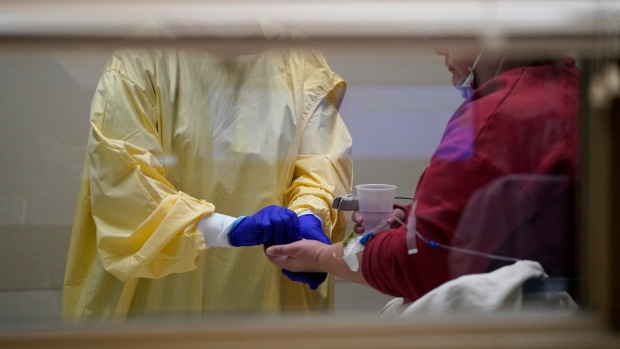 FILE - In this Nov. 24, 2020, file photo, registered nurse Chrissie Burkhiser, left, hands medication to a COVID-19 patient inside the emergency room at Scotland County Hospital in Memphis, Mo. States faced a deadline on Friday, Dec. 4, 2020, to place orders for the coronavirus vaccine as many reported record infections, hospitalizations and deaths, while hospitals were pushed to the breaking point — with the worst feared yet to come. (AP Photo/Jeff Roberson, File)

COLUMBUS, Ohio - States faced a deadline on Friday to place orders for the coronavirus vaccine as many reported record infections, hospitalizations and deaths, while hospitals were pushed to the breaking point - with the worst feared yet to come.

The number of Americans hospitalized with COVID-19 hit an all-time high in the U.S. on Thursday at 100,667, according to the COVID Tracking Project. That figure has more than doubled over the past month, while new daily cases are averaging 210,000 and deaths are averaging 1,800 per day, according to data compiled by Johns Hopkins University.

The state expects to get enough doses of new coronavirus vaccines by the end of the year to inoculate more than 383,000 health care workers and long-term care facility residents, the state's health director said Friday. Next in line are teachers and other essential workers, followed by older Arizonans or people otherwise at higher risk of serious cases of COVID-19.

Nevada reported 48 new deaths from the coronavirus Thursday, marking the deadliest day since the onset of the pandemic as cases and deaths continued to rise more than a week after new restrictions were implemented on businesses. One hospital was so full it was treating patients in an auxiliary unit in the parking garage.

State officials said Friday that they expect to receive 164,000 doses this month.

North Carolina reported a record 5,600 new confirmed cases Thursday and 2,100 hospitalizations, as it awaited nearly 85,000 doses of the Pfizer vaccine, perhaps as early as Dec. 15.

Health care workers at a limited number of mostly large hospitals will be the first in line to receive the vaccine, prioritizing those who are at highest risk of exposure to the virus, officials said. Future doses will be distributed to more hospitals and to local health departments, followed by nursing home staff and residents.

Health officials fear the pandemic will get worse before it gets better because of delayed effects from Thanksgiving, when millions of Americans disregarded warnings to stay home and celebrate only with members of their household.

At the same time, hospitals - and their workers - were stretched to the limit.

In Pennsylvania, almost half of all hospitals in the south-central region and a third of those in the southwest anticipated staffing shortages within a week, according to the state Department of Health.

The state's top health official, Dr. Rachel Levine, said Thursday that 85% of the state's intensive care beds were occupied and modeling shows they'll be full this month. Meanwhile, nurses in the Philadelphia area said the overwhelming number of COVID-19 patients was affecting the quality of care they can provide.

“I hear from physicians and from hospital leadership all the time about how strained the hospitals are,” Levine said.

Officials also are concerned that Americans will let down their guard once states begin administering vaccines.

It will take weeks to months before many of the nation's most vulnerable residents can be immunized, White House coronavirus response co-ordinator Dr. Deborah Birx said Thursday. Until then, Americans should not hold indoor gatherings with people they don't live with or take off their masks when they're outdoors, and should continue to keep their distance from others and wash their hands, she said.

“I think everyone can see that this current surge that we're experiencing is much faster and broader across the United States and is lasting longer,” Birx said after a meeting at United Nations headquarters in New York.

Nationwide, the coronavirus is blamed for almost 277,000 deaths and 14 million confirmed infections.

An influential modeling group at the University of Washington said Friday the expected U.S. vaccine rollout will mean 9,000 fewer deaths by April 1. The Institute for Health Metrics and Evaluation predicts that warmer temperatures and then rising vaccination rates will lead to steady declines in the daily death toll starting in February.

But even with a vaccine, the death toll could reach 770,000 by April 1 if states do not act to bring current surges under control, the group said.

States learned only this week how many doses to expect and when, and received guidance from the Centers for Disease Control and Prevention recommending that health care workers and nursing home patients get the first doses. That meant that some had to make last-minute adjustments.

“2020 has taught us to plan for what you can and then expect something to happen that you never dreamed would happen,” Dr. Michelle Fiscus, medical director of the Tennessee Department of Health's immunization program, said during a Friday webinar. “I can't tell you how many plans we've crumpled up and thrown away.”

Connecticut Gov. Ned Lamont said nursing home residents, along with front-line health care workers, will get the first doses in his state.

But states also were balancing concerns about the economy and protecting essential workers.

Kansas Gov. Laura Kelly said the state's vaccine plan calls for the first shots to go to front-line health care workers with a high risk of coronavirus exposure, including workers in nursing homes, as well as nursing home residents. Meatpacking plant workers and grocery store employees will be next in line, along with first responders.

In Ohio, health care workers and others caring for COVID-19 patients and emergency medical responders will be first in line for the vaccine, Republican Gov. Mike DeWine said Friday. Vulnerable people who live together and those who care for them, including nursing home and assisted facility residents and staff, will be next.

The state expects more than 500,000 in combined doses from Pfizer and Moderna by the end of December, the governor said, with the first distribution starting on Dec. 15. DeWine said it's too soon to know when adults without health problems will receive a vaccine and warned Ohioans will have to remain vigilant.

“We're in a very dangerous situation and ... we can't let our hospitals get to the point where health care is threatened,” DeWine said. “The curfew, mask-wearing, retail inspection have helped, but they haven't helped enough. We'll have to do more. We don't have a choice.”