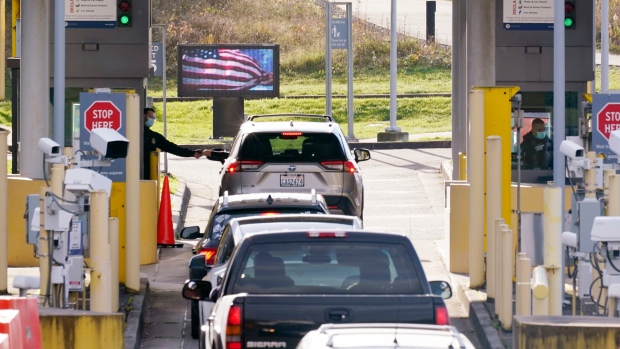 WASHINGTON, Jan 20 (Reuters) - The U.S. Department of Homeland Security (DHS) is announcing Thursday it is requiring that non-U.S. essential workers such as truck drivers and nurses who are crossing land borders be fully vaccinated against COVID-19, effective Saturday.

The Biden administration first announced in October that effective Nov. 8 it would again allow non-essential foreign visitors to travel from Canada and Mexico into the U.S. across land borders if they were vaccinated.

The U.S. land borders with Canada and Mexico had been closed to non-essential travel for 20 months because of COVID-19 concerns.

DHS is announcing on Thursday it is extending those requirements to essential workers who are not U.S. citizens or lawful permanent residents.

Starting Saturday DHS "will require that non-U.S. individuals entering the United States via land ports of entry or ferry terminals along our Northern and Southern borders be fully vaccinated against COVID-19 and prepared to show related proof of vaccination," said DHS Secretary Alejandro Mayorkas.

Unlike air travelers, people crossing land borders are not required to show proof of a recent negative COVID-19 test.

On Jan. 15, Canada imposed its own vaccine mandate for U.S. truck drivers crossing the Canadian border.

Because more than two-thirds of the C$650 billion ($521 billion) in goods traded annually between Canada and the United States travels on roads, truckers were deemed essential workers until now and traveled freely even when the Canadian border was closed for 20 months.

Prime Minister Justin Trudeau defended the mandate on Wednesday that was announced in November, saying Canada was "aligned" with the United States, its largest trading partner.