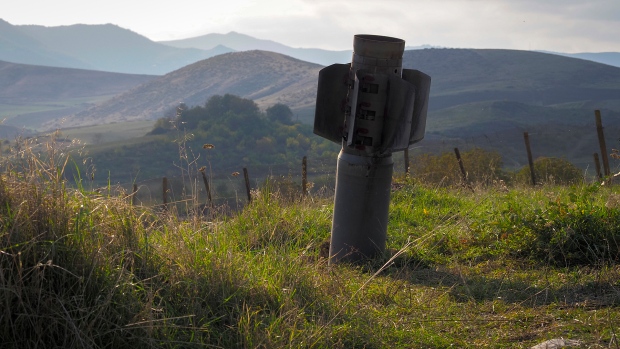 The tail of a multiple rocket 'Smerch' sticks out of the ground near the town of Martuni, the separatist region of Nagorno-Karabakh, Friday, Oct. 23, 2020. Heavy fighting over Nagorno-Karabakh is continuing with Armenia and Azerbaijan trading blame for new attacks. Two Russia-brokered cease-fires collapsed instantly after taking effect, and the warring parties have continued to exchange blows with heavy artillery, rockets and drones. (AP Photo)

WASHINGTON -- The Trump administration waded cautiously Friday into international efforts to halt fighting between Armenia and Azerbaijan, which are engaged in their worst conflict in more than 25 years.

Secretary of State Mike Pompeo met separately in Washington with the foreign ministers of both countries in a bid to promote a cease-fire in hostilities over the disputed region of Nagorno-Karabakh. The State Department said Pompeo had emphasized to Armenian Foreign Minister Zohrab Mnatsakanyan and Azerbaijani Foreign Minister Jeyhun Bayramov the need “to end the violence and protect civilians.”

“Both must implement a ceasefire and return to substantive negotiations,” Pompeo said in a tweet after his talks.

Friday's meetings followed failed Russian-led attempts to broker a truce and lower-profile U.S. intervention to promote an end to the fighting. U.S. officials, including Pompeo's deputy, Stephen Biegun, have appealed for the countries to return to a dialogue over the territory.

Meanwhile, heavy fighting raged over Nagorno-Karabakh even as the discussions in Washington were taking place. The two sides traded accusations involving the shelling of residential areas, and authorities in Nagorno-Karabakh said the town of Martakert and several villages in the Martuni region were struck by Azerbaijani rockets.

The Azerbaijani Defence Ministry denied the claim and accused Armenian forces of targeting the Terter, Agdam and Agjabedi regions of Azerbaijan overnight.

Nagorno-Karabakh lies within Azerbaijan but has been under the control of ethnic Armenian forces backed by Armenia since a war there ended in 1994. The fighting that started Sept. 27 marks the worst escalation in the conflict since the war's end.

Azerbaijan has accused Armenia of targeting its towns and villages with artillery and missiles, which Armenian authorities have denied.

Russian President Vladimir Putin said Thursday that Moscow's information indicated that the combined death toll from the nearly four weeks of fighting was approaching 5,000, a significantly higher number than officially reported by the warring parties.

Russia, along with the United States, has co-chaired the so-called Minsk Group set up by the Organization for Security and Cooperation in Europe to mediate in the conflict.

In his meetings, Pompeo “also stressed the importance of the sides entering substantive negotiations under the auspices of the OSCE Minsk Group Co-Chairs to resolve the conflict based on the Helsinki Final Act principles of the non-use or threat of force, territorial integrity, and the equal rights and self-determination of peoples,” the State Department said.

Putin said Russia is doing its best to negotiate a lasting truce. He voiced hope that the United States would work co-operatively to help end hostilities and mediate a political settlement.

Turkey has thrown its weight behind Azerbaijan, vowing to support its longtime ally “on the battlefield or the negotiating table.” It has trained Azerbaijani military and provided it with strike drones and long-range rocket systems that gave Azerbaijan a strong edge on the battlefield.