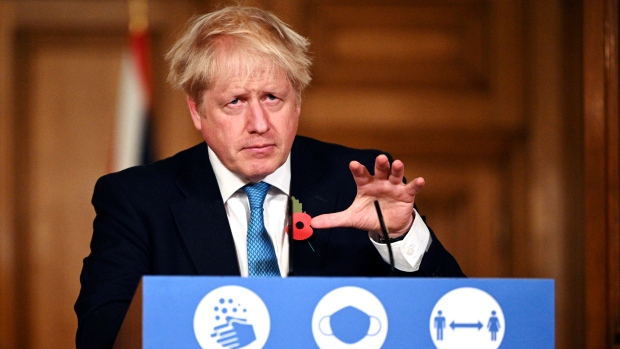 LONDON - The British government and the Bank of England joined forces Thursday to provide further support to an economy facing a difficult winter following the imposition of new coronavirus lockdown measures.

Soon after the central bank increased its monetary stimulus by a bigger than anticipated 150 billion pounds ($195 billion), the government extended its salary support program through March, a move welcomed by employers and employees in firms that have had to close as a result of the heightened restrictions and face depressed demand when they are allowed to reopen.

Later, Prime Minister Boris Johnson offered a slew of bleak virus-related statistics to explain the need for the new tighter measures. His point was clear: the financial support is there - follow the rules.

“I know many of you are anxious, weary and quite frankly fed up with the very mention of this virus,” Johnson said at a news conference.

The extension of the furlough program, which sees the government pay 80% of the wages of people retained by firms, up to 2,500 pounds a month, comes on the day that England is back in lockdown and the other U.K. nations - Scotland, Wales and Northern Ireland - live under heightened restrictions.

Like others in Europe, the U.K. has seen a sharp spike in new coronavirus infections recently. Johnson said the average daily number of new cases was now 22,398 against 9,716 a month ago. That's led to big increases in the number of people needing hospitalization, and in those dying. On Wednesday, the U.K. recorded another 492 virus-related deaths, the highest daily number since May, taking the overall death toll to 47,742, Europe's highest.

The Job Retention Scheme, which was introduced alongside the national lockdown in March and helped keep a lid on unemployment, was due to expire at the end of October and to be replaced by a less generous program. However, it was reinstated on Saturday when the government abruptly announced another lockdown for England to last until Dec. 2.

The lockdown will see millions of workers going idle once again as it requires all non-essential venues such as pubs, restaurants, and stores selling items like books, clothing and sneakers, to close. Support for self-employed workers was also made more generous.

“It's clear the economic effects are much longer lasting for businesses than the duration of any restrictions, which is why we have decided to go further with our support,” Sunak told lawmakers.

The extension was welcomed as it relieves the pressure on firms in what would traditionally be the busiest time of the year - the run-up to Christmas.

“Hospitality is facing a tough winter, so this enhanced support is crucial and will safeguard jobs and help businesses to plan for more certain future,” said Kate Nicholls, CEO of the U.K. Hospitality lobby group.

The Bank of England estimates that the number of people on furlough will more than double in November to 5.5 million. At the height of the program, around 9 million workers, or around a third of the workforce, were on furlough.

The government had for months balked at calls for an extension, arguing it wasn't its role to support every job forever. It was no doubt also concerned about the program's cost, at over 40 billion pounds already.

While welcoming the move, the main opposition Labour Party said the delay in doing so generated uncertainty and prompted some firms to dismiss staff in recent weeks. The government said the scheme could be backdated so anyone on payroll on Sept. 23 but then made redundant can be re-employed.

“This cycle of bluster, denial and then running to catch up is costing jobs and causing chaos,” said Labour's economy spokeswoman, Anneliese Dodds.

Though the furlough program prevented mass unemployment, the jobless rate has edged up from a four-decade low of 3.8% to 4.5% during the pandemic. On Thursday, supermarket chain Sainsbury's said it will shed around 3,500 jobs as part of plans to permanently close its meat, fish and deli counters, as well as some of its Argos standalone stores.

The extension came as the Bank of England warned that the British economy will contract a further 2% in the fourth quarter and faces an “unusually uncertain” outlook. However, it laid out the hope that a recession - widely defined as two straight quarters of contraction - may be avoided.

Its nine-member policymaking panel increased the bank's bond-buying program to ensure banks carry on lending. The stimulus was bigger than the 100 billion pounds anticipated in financial markets. The Monetary Policy Committee also unanimously kept the bank's main interest rate at the record low of 0.1%.

“We believe there is value in acting quickly and strongly to support the economy and avoid the risks of any short-term disruption,” Bank Governor Andrew Bailey said.

Danica Kirka contributed to this report.