UK cuts overseas aid after worst recession in over 300 years 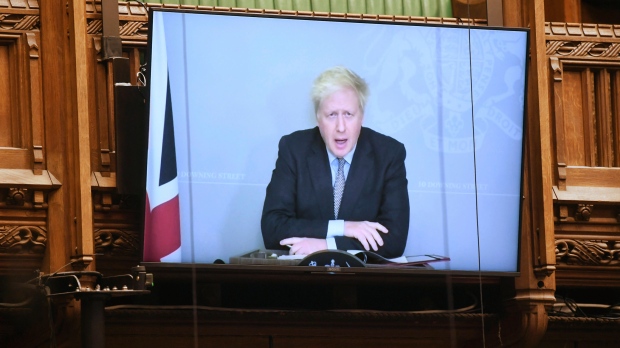 LONDON - The British government faced fury Wednesday over its decision to ditch its long-standing target for overseas aid in the wake of what it described as the deepest recession in over three centuries.

In a statement to lawmakers, Treasury chief Rishi Sunak said the target to allocate 0.7% of national income to overseas aid will be cut to 0.5%. The move is expected to free up 4 billion pounds ($5.3 billion) for the Conservative government to use elsewhere, money that critics say could be used to save tens of thousands of lives in the poorest parts of the world.

While expressing “great respect to those who have argued passionately to retain this target,” Sunak said “sticking rigidly” to it “is difficult to justify” to people at a time when the economy has been so battered by the coronavirus pandemic.

“At a time of unprecedented crisis, government must make tough choices,” he said.

Without giving a timetable, he said that the government aims to return to the target first laid out by the Labour government of Tony Blair in 2004. And he said that even with the new target, the U.K. will still be the second biggest aid spender among the Group of Seven leading industrial nations.

The decision goes against the government's promise last year to maintain the aid target and drew sharp criticism from across the political spectrum, including within Prime Minister Boris Johnson's own Conservative Party.

Liz Sugg, a junior minister at the Foreign Office, has quit, arguing that the decision “will diminish our power to influence other nations to do what is right.”

The U.K. has for years been considered one of the world's leaders in development and aid so the government's decision to lower the target was met with anger and dismay from poverty campaigners.

“Cutting the U.K.'s lifeline to the world's poorest communities in the midst of a global pandemic will lead to tens of thousands of otherwise preventable deaths,” said Oxfam Chief Executive Danny Sriskandarajah.

Save the Children Chief Executive Kevin Watkins also said the decision had “broken Britain's reputation for leadership on the world stage” ahead of its hosting of the 2021 United Nations Climate Change Conference next year.

The Archbishop of Canterbury Justin Welby joined the chorus of disapproval, describing the cut as “shameful and wrong” and urging lawmakers “to reject it for the good of the poorest, and the U.K.'s own reputation and interest.”

In a sobering assessment that provided the backdrop to the cut, Sunak sought to balance ongoing support for the economy with a longer-term commitment to heal public finances after a stark deterioration.

“Our health emergency is not yet over and our economic emergency has only just begun,” he said.

Sunak said the government's independent economic forecasters are predicting that the British economy will shrink 11.3% this year, the “largest fall in output for more than 300 years.”

The Office for Budget Responsibility expects the economy to grow again next year as coronavirus restrictions are eased and hoped-for vaccines come on stream. The agency is predicting growth of 5.5% in 2021 and 6.6% the following year. As a result the output lost during the pandemic won't have been recouped until the final quarter of 2022.

Sunak warned that the pandemic's cost will create long-term “scarring,” with the economy 3% smaller in 2025 than predicted in March, before the spring lockdown.

The massive fall in output this year has led to a huge increase in public borrowing as the government sought to cushion the blow and tax revenues fell. Sunak said the government has pumped 280 billion pounds into the economy to get through the pandemic. Public borrowing this fiscal year is set to hit 394 billion pounds, or 19% of national income, “the highest recorded level of borrowing in our peacetime history.”

He warned that underlying public debt is rising towards 100% of annual GDP.

“High as these costs are, the costs of inaction would have been far higher,” he said. “But this situation is clearly unsustainable over the medium term.”