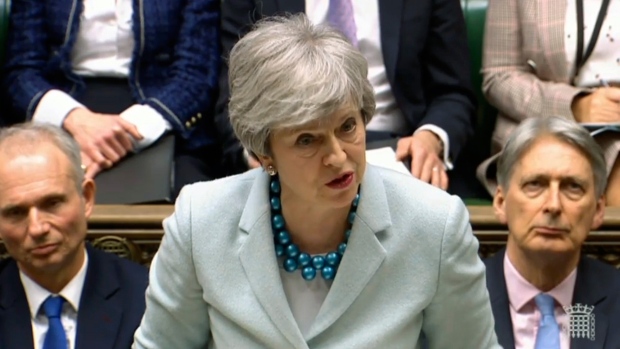 Britain's Prime Minister Theresa May makes a statement on Brexit to lawmakers in the House of Commons, London, Monday March 25, 2019. May is under intense pressure Monday to win support for her Brexit deal to split from Europe.(House of Commons via AP)

LONDON -- British lawmakers were preparing to blow open the Brexit process and put a host of rejected options back on the table -- including keeping the U.K. close to the European Union or even remaining a member -- as Prime Minister Theresa May defiantly insisted Tuesday that Parliament should approve her twice-defeated divorce deal instead.

Lawmakers are scheduled to vote Wednesday on multiple flavours of Brexit, after the House of Commons voted to wrest the parliamentary timetable away from May's weakened government and hold votes on alternatives to her rejected withdrawal agreement.

The largely pro-EU legislators behind the unprecedented move hope to find a form of Brexit that can command a majority in Parliament. Votes are due to be held Wednesday on options that could include remaining in the EU's single market and customs union, calling a new membership referendum and cancelling Brexit -- all ideas that May has repeatedly rejected.

They plan to see which ideas have the most support, and then hold another day of votes next week to try to find agreement on a proposal.

The government, which usually controls the scheduling of votes in Parliament, said the lawmakers' move "upends the balance between our democratic institutions and sets a dangerous, unpredictable precedent for the future."

The votes will not be legally binding, and Health Secretary Matt Hancock told the BBC that the government wouldn't "pre-commit" to accepting the option backed by lawmakers because they may come up with a plan that is impractical. It's also possible lawmakers could support contradictory options, or none at all.

"If the Commons voted for the sun to rise in the west, the government would not be able to implement that," he said.

"The best way through this impasse is the one deal that has been negotiated with the EU that can be delivered quickly now," Hancock said, referring to the prime minister's agreement.

But government officials acknowledged they were no longer in control of Brexit. May's authority was hanging by a thread after 30 members of her Conservative Party defied her instructions and voted late Monday for Parliament to take control of the process. Three government ministers resigned rather than vote with the government.

Almost three years after Britons voted to leave the EU, the date and terms of its departure are up in the air. Last week, the EU granted Britain a delay to the scheduled March 29 exit date, saying that if Parliament approved the proposed divorce deal, the U.K. would leave the EU on May 22. If not, the government has until April 12 to tell the 27 remaining EU countries what it plans to do -- leave without a deal, cancel Brexit or propose a radically new path.

"It is possible now to work in Britain toward a cross-party alliance," he said.

May continued to push for approval of her deal with the EU even though the House of Commons overwhelmingly rejected it during votes in January and March.

The government said it might be possible to hold a third vote on the agreement Thursday, but only if it looked like there was a reasonable chance it might pass.

That appeared unlikely after the small but influential Democratic Unionist Party from Northern Ireland, which props up May's minority government, refused to water down its opposition to the withdrawal agreement. The DUP controls 10 crucial votes in the House of Commons, and many hard-line Brexit supporters may follow the party's lead when deciding how to vote.

DUP Brexit spokesman Sammy Wilson wrote in the Daily Telegraph that his party couldn't support May's "toxic" deal. He said delaying Brexit by up to a year would be preferable to "volunteering to be locked into the prison of the withdrawal deal with the cell door key in the pocket of Michel Barnier," the EU's chief negotiator.

May has warned pro-Brexit legislators that continuing to reject the deal could lead to a "slow Brexit" that postpones the country's departure indefinitely,

Jacob Rees-Mogg, a leading pro-Brexit Conservative, acknowledged that "the choice seems to be Mrs. May's deal or no Brexit."

Some members of the public, meanwhile, are losing patience with the parliamentary process and the fading promises made by pro-Brexit politicians.

"It's a little bit similar to the way that when you're in quite a good nightclub and then a friend of yours says ... 'I know somewhere else to go' and then you all leave and then you realize you can't get into the other club," said tech executive Russell Robinson.

"It was a very badly thought out plan and now we're stuck in the street eating kebabs," he said, referring to a common late-night fast-food staple.