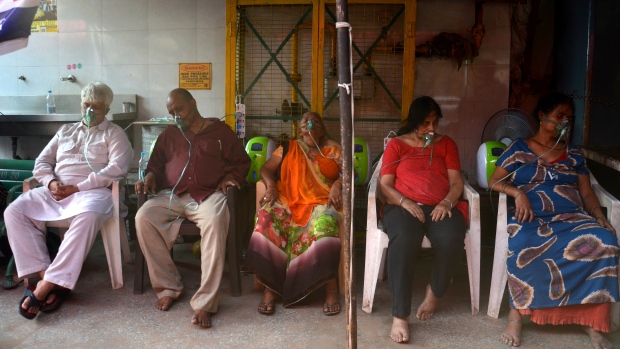 COVID-19 patients receive oxygen outside a Gurdwara, a Sikh house of worship, in New Delhi, India, Saturday, May 1, 2021. India on Saturday set yet another daily global record with 401,993 new cases, taking its tally to more than 19.1 million. Another 3,523 people died in the past 24 hours, raising the overall fatalities to 211,853, according to the Health Ministry. Experts believe both figures are an undercount. (AP Photo/Amit Sharma)

LONDON - Britain rushed to increase aid for India's teetering health care system on Sunday, promising more ventilators and expert advice as doctors grapple with a surge in coronavirus infections that is killing thousands of people a day.

The U.K. government said it will send an additional 1,000 ventilators to India. In addition, England's National Health Service, which has battled one of the worst COVID-19 outbreaks in Europe, is creating an advisory group to share its expertise with Indian authorities.

Prime Minister Boris Johnson plans a video meeting with his Indian counterpart, Narendra Modi, on Tuesday to discuss further co-operation between the two countries, the U.K. government said in statement.

India recorded 392,488 new infections, down from a high of more than 400,000 in the previous 24 hours. It also reported 3,689 deaths, raising overall virus fatalities to 215,542. Experts believe both figures are undercounts.

The new round of government aid comes in addition to the 200 ventilators, 495 oxygen concentrators and three oxygen generation units the U.K. said it was sending to India last week.

“The terrible images we have seen in India in recent weeks are all the more powerful because of the close and enduring connection between the people of the U.K. and India,” Johnson said.

“I am deeply moved by the surge of support the British people have provided to the people of India and am pleased the U.K. government has been able to play our part in providing life-saving assistance.”