UK to delay COVID-19 reopening plan amid increase in cases 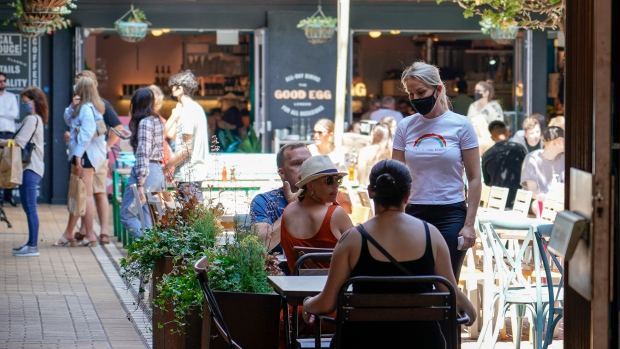 People sit at outdoor tables of a restaurant in Carnaby Street, in London, Monday, June 14, 2021. British Prime Minister Boris Johnson is expected to confirm Monday that the next planned relaxation of coronavirus restrictions in England will be delayed as a result of the spread of the delta variant first identified in India. (AP Photo/Alberto Pezzali)

LONDON (AP) -- British Prime Minister Boris Johnson has confirmed that the next planned relaxation of coronavirus restrictions in England will be delayed by four weeks until July 19 as a result of the spread of the delta variant.

In a press briefing Monday, Johnson said he is “confident that we won't need more than four weeks” as millions more people get fully vaccinated against the virus, which could save thousands of lives.

He said it is “sensible to wait just a little longer” and that “now is the time to ease off the accelerator.”

Under the government's plan for coming out of lockdown, all restrictions on social contact were set to be lifted next Monday. Many businesses, particularly those in hospitality and entertainment, voiced their disappointment ahead of the official announcement.

THIS IS A BREAKING NEWS UPDATE. AP's earlier story follows below.

LONDON (AP) - British Prime Minister Boris Johnson is expected to disappoint people across England later Monday by saying that restrictions on social contact will remain in place for a few more weeks because of rising infections due to the delta coronavirus variant.

The variant first found in India is estimated by some to be at least 60% more contagious than the previous dominant strain. British scientists have urged the prime minister to err on the side of caution and postpone plans to lift most coronavirus restrictions in England on June 21. There is growing speculation that the rules will stay in effect at least until July 19.

For businesses, particularly those in hospitality and entertainment, any delays to what has been dubbed by the British media as “Freedom Day” will be a massive disappointment. Composer Andrew Lloyd Webber has been particularly aghast at the prospect of a delay and has said he will reopen his theaters regardless, a move that would risk him being arrested.

A delay will be a particularly bitter pill for nightclubs, as they have not been allowed to reopen since March 2020. It will also likely impact how many fans are allowed into the Wimbledon tennis tournament, as well as the European Championship soccer matches at Wembley Stadium, which will host the tournament's semi-finals and final.

Many businesses, including many pubs and theaters, have remained closed despite the recent easing in restrictions as the reduced capacities allowed have meant it has not been financially viable.

“The reality is we have marched the troops up the hill,” said Howard Panter, 72, co-founder of theatre operator Trafalgar Entertainment. “Thousands of people have been mobilized in order to work in the theatre industry, to start work from next Monday, and now we are being told, apparently: 'Oh no, it's not that date'.”

Mark Davyd, chief executive of the Music Venue Trust charity, called on the government to provide additional financial support if there is a delay.

“We are apparently going to be four weeks away from when we might be able to reopen but in those four weeks most of these venues could be closed down because they are unable to pay their bills,” he said.

When Johnson first outlined the government's four-stage plan for lifting the lockdown in England in February, he set June 21 as the earliest date by which restrictions on people gathering would be lifted. However, he stressed at the time that the timetable was not carved in stone and that all the steps would be driven by “data not dates” and would seek to be “irreversible.”

While hosting the Group of Seven summit in southwest England over the weekend, Johnson conceded that he had grown more pessimistic about the possibility of pressing ahead with the next reopenings.

Still, there's growing speculation that Johnson will lift the cap on weddings after Health Minister Edward Argar told Sky News that couples waiting to wed are “very much” in the mind of the prime minister. At present, weddings are permitted but with only 30 guests.

“There will be a lot of couples who planned, hoped to do it, put a line through it, done it again and rescheduled again,” he said. “Not only does that cost money, but emotionally that is incredibly difficult for couples who want to have their special day.”

The speed at which new coronavirus infections have been rising has piled the pressure on Johnson to delay the reopening so more people can get vaccinated. Argar said 10 million second jabs would be administered over the month, providing recipients with high protection against the delta variant.

Professor Andrew Hayward, an epidemiologist from University College London who is a member of a group advising the government, said removing remaining restrictions could “fan the flames” of rising infections. He compared the process to driving a car around a bend without knowing what was around the corner.

On Sunday, the British government reported 7,490 new confirmed cases, one of the highest daily numbers since the end of February. Daily infections have increased threefold over the past few weeks but are still way down from the nearly 70,000 daily cases recorded in January.

Many blame the Conservative government for the spike in infections, saying it acted too slowly to impose the strictest quarantine requirements on everyone arriving from India, which has endured a catastrophic resurgence of the virus.

Across Europe, many countries, including France, have tightened restrictions for British travelers to prevent the delta variant from spreading. Others, like Spain, are allowing British tourists to arrive without being required to take a test if they have been fully vaccinated.

Despite concerns about the delta variant, the U.K.'s vaccine rollout has won plaudits as one of the world's speediest and most coherent. As of Sunday, around 62% of the British population had received one shot, while about 44% had got two jabs.

The government aims to offer every adult in the U.K. one vaccine dose by the end of July. The devolved administration in Wales said it will have offered one jab to every adult by Monday, six weeks ahead of schedule.

The rapid rollout of vaccines and a strict months-long lockdown helped drive down the number of virus-related deaths in the U.K. in recent months. Despite that, the country has recorded nearly 128,000 virus-related deaths, more than any other nation in Europe.