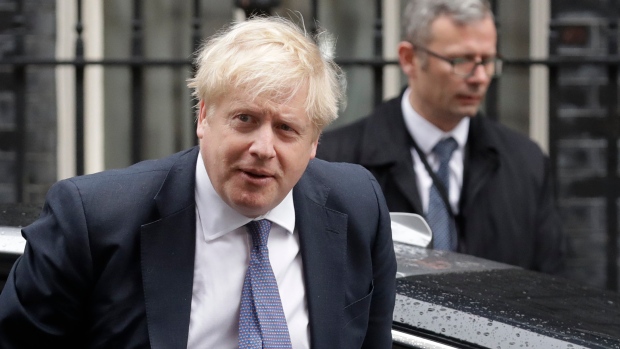 LONDON - British Prime Minister Boris Johnson tightened his grip on the government Thursday with a Cabinet shake-up that triggered the unexpected resignation of his Treasury chief, the second-most powerful figure in the administration.

Sajid Javid's resignation was the most dramatic moment i n a shuffle that saw Johnson fire a handful of Cabinet members he viewed as under-performing or untrustworthy, and promote loyal lawmakers to senior jobs.

Javid smiled as he entered the prime minister's 10 Downing St. office on Thursday morning to meet Johnson along with other ministers who were being promoted or kept in place. But a spokesman confirmed soon after that Javid had quit.

Speaking later, Javid said Johnson had asked him to fire all his aides and replace them with staff approved by the prime minister's office.

“I don't believe any self-respecting minister would accept such conditions,” Javid said.

“I felt that I was left with no option other than to resign.”

Johnson quickly replaced him with Rishi Sunak, who had previously been a deputy to Javid at the Treasury and is widely regarded as a dependable loyalist to the prime minister .

Johnson's office confirmed it was creating a new team of advisers covering both the prime minister's office and the Treasury.

Javid's resignation followed reports he had clashed with Johnson's powerful adviser, Dominic Cummings, a self-styled political disruptor who is mistrusted by many lawmakers and officials.

“Dominic Cummings has clearly won the battle to take absolute control of the Treasury and install his stooge,” said John McDonnell, finance spokesman for the opposition Labour Party.

Javid, who became Chancellor of the Exchequer when Johnson succeeded Theresa May as prime minister in July, had been due to deliver his first budget in less than a month - a crucial staging post for the government in the wake of the country's departure from the European Union last month.

The prime minister's office could not confirm Thursday whether the budget would take place as scheduled on March 11.

In the wake of Brexit, Johnson has vowed to take a more interventionist economic approach than some of his Conservative predecessors in order t o boost poorer regions outside the economic hub of London and southeast England. That involves ambitious infrastructure plans, including a 100 billion-pound ($130 billion) high-speed railway connecting London to central and northern England.

He said Javid's departure should “allow the government to push through even bigger increases in public investment and perhaps resuscitate tax cuts that previously looked dead in the water.”

That appeared to be the main sentiment in financial markets, as traders calculated that the higher spending would inevitably lead to the Bank of England having to raise interest rates more quickly than anticipated. The pound got a boost, trading 0.8% higher at $1.3058.

The resignation was a curve ball in a Cabinet shake-up that comes in the wake of the Conservatives' big election win in December. That victory allowed Johnson to take Britain out of the EU last month, delivering on his key election promise.

Now his Conservative administration faces the even bigger challenge of negotiating a new trading relationship with the EU while also seeking trade deals with the United States and other countries.

Britain and the EU are aiming to have a deal covering trade, security and other areas in place by the time a post-Brexit transition period ends on Dec. 31.

So far, the two sides are far apart in their demands. And even with a deal, the U.K. faces a huge adjustment when decades of seamless trade and travel with the EU end at the start of 2021.

Johnson's office had earlier said the Cabinet changes would be modest, and apart from Javid most senior ministers kept their jobs. Foreign Secretary Dominic Raab, Home Secretary Priti Patel, and Cabinet Office Minister Michael Gove were among those staying in post.

Several high-profile women in Johnson's government, including Business Secretary Andrea Leadsom and Housing Minister Esther McVey, were fired. Others were promoted, including Suella Braverman to the position of attorney general and Anne-Marie Trevelyan to the post of international development secretary.

Brandon Lewis, a former security minister, was named to replace him.

As well as reworking his Cabinet, Johnson appointed a new leader for the U.N. climate change conference that Britain is due to host later this year. The summit, known as the 26th Conference of the Parties, or COP26, is scheduled to be held in Glasgow in November.

Planning for that has got off to a rocky start, with Johnson last week firing Claire O'Neill, a former British government minister appointed last year to head up the event.

The government said Thursday that Alok Sharma, previously in charge of international development, would become business secretary and also take charge of COP26.