UK under pressure as COVID-19 epidemic doubling every 9 days 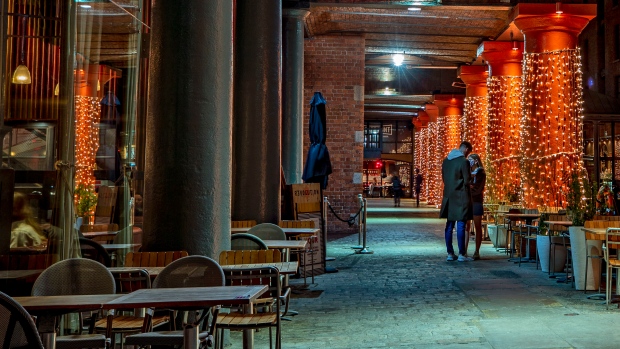 86 columns that surround the inner quay waterway are lit with some thousands of seasonal lights at The Royal Albert Dock in Liverpool, England, Tuesday Oct. 27, 2020. As longer winter nights sweep in, the dock will become one of the city's most scenic attractions, although nobody knows if people will come to see the spectacle because of the ever changing coronavirus lockdown restrictions. (Peter Byrne/PA via AP)

LONDON - The British government is under pressure to develop a national strategy to combat a surge of COVID-19 cases and “rescue Christmas” as scientists warn that the number of people hospitalized with the disease in the U.K. could almost triple by the end of next month unless something more is done now.

Mark Walport, a former chief scientific officer, said Britain only needs to look across the English Channel to see what's coming. Britain's current measures are similar to those in France and Spain, where authorities are struggling to control the virus and daily cases have already far outstripped those in the U.K.

“With our current measures â€¦ there's little evidence that there is as much social distancing as there was when we clamped down on the first wave and so we know that the risk is significant that cases will continue to grow,” Walport told the BBC.

According to results from a large, ongoing study into the COVID-19 epidemic in England, scientists estimated that there are about 96,000 new cases every day and that the outbreak is doubling in size every nine days.

“The rate of growth we're seeing is really quite rapid,” said Steven Riley, a professor of infectious disease dynamics at Imperial College London, one of the leaders of the study funded by the Department of Health.

Riley and colleagues took samples from more than 85,000 people randomly selected across England in late October and found that about one in every 128 people in England is infected with the coronavirus.

They reported that rates were increasing among all age groups, including those most at risk: they noted a tripling of COVID-19 rates in people aged 55 to 64 and a doubling in those over 65.

“Our data shows there's no reason to expect that exponential rise to change for the next few weeks regardless of what we do,” Riley warned. “New cases will turn into hospitalizations.” He said it was unclear whether recently imposed restrictions in northern England would be enough to stop the spiraling spread of the virus.

Riley said that if politicians were considering more stringent measures, “the (study) results argue for something sooner rather than later,” adding that “something needs to change before Christmas.”

Dr. Paul Hunter of the University of East Anglia, who was not connected to the study, said it was “likely that infection rates now are very similar to and maybe even higher than at the peak in April.”

The World Health Organization said for the second consecutive week, the European region accounted for the biggest proportion of new infections, with more than 1.3 million cases or about 46% of the worldwide total. The U.N. health agency also said deaths were also on the rise in Europe, with about a 35% spike since the previous week, and hospitalizations and ICU occupancy due to COVID-19 increased in 21 countries across Europe.

Walport's assessment came as two opposition parties called on Prime Minister Boris Johnson to convene a summit of the U.K.'s four nations to develop a co-ordinated plan for combatting COVID-19.

Under the U.K.'s system of devolved government, Northern Ireland, Scotland and Wales have all developed their own rules to fight the pandemic. Meanwhile, Johnson has implement a three-tiered regional strategy to applies only in England. That has a led to a patchwork of regulations that change from one nation to the next, and sometimes from city to city.

Liberal Democrat leader Ed Davey said the four nations must develop a unified strategy to avoid confusion and deliver a clear message. The Liberal Democrats and Northern Ireland's Alliance Party have written to Johnson asking for a summit.

“I think they need to have some action now â€¦ because otherwise, if we don't get the virus back under control, I'm afraid there's little chance of being able to rescue Christmas,” Davey told the BBC.