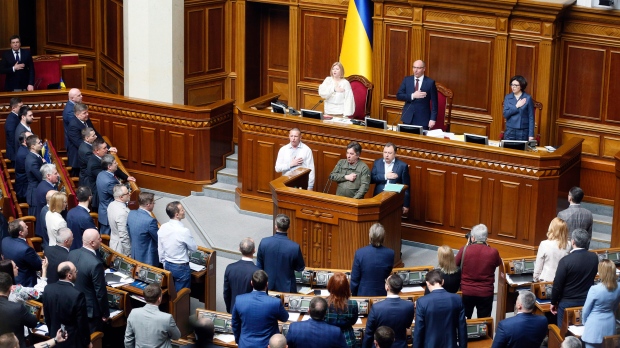 KIEV, Ukraine -- Ukraine's ruling parliamentary coalition collapsed on Friday in what represents a setback for the president-elect's plans to hold early elections.

The speaker in the Supreme Rada said he has received a notification from lawmakers about the breakdown of the coalition, which was made up of various parties including lawmakers from defeated President Petro Poroshenko's party.

In last month's election, President-elect Volodymyr Zelenskiy vowed to disband the parliament, claiming that it does not represent the interests of the people.

The chamber, dominated by supporters of the outgoing president, could make it difficult for Zelenskiy to propose his legislation.

Dissolving the parliament is necessary for holding a snap election. However, under Ukrainian law, the president cannot do so if there is no governing coalition. The parliament now has 30 days to form a new coalition.

Zelenskiy, who is to be sworn in as president on Monday, expressed his frustration with the announcement.

“The games at the parliament present yet another proof that the lawmakers don't care at all about the people who voted for them,” he said.