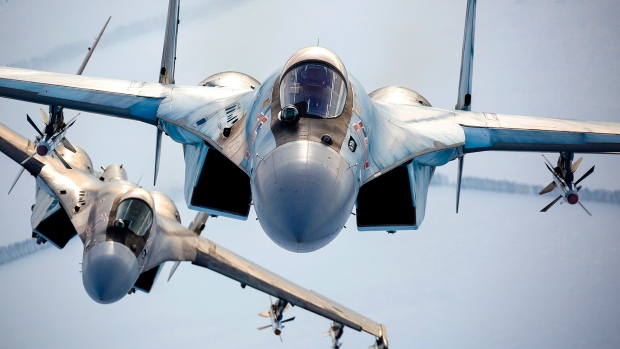 In this photo released by the Russian Defense Ministry Press Service, a pair of Russian Su-35 fighter jets fly in the sky in Russia, Sunday, Nov. 28, 2021. The Ukrainian and Western officials have expressed concern that a Russian military buildup near Ukraine could signal plans by Moscow to invade its ex-Soviet neighbor. (Russian Defense Ministry Press Service via AP)

KYIV, Dec 3 (Reuters) - Russia has massed more than 94,000 troops near Ukraine's borders and may be gearing up for a large-scale military offensive at the end of January, Ukraine's defense minister told parliament on Friday, citing intelligence reports.

Oleksii Reznikov said Ukraine would not do anything to provoke the situation but was ready to fight back if Russia launched an attack. He said Ukraine was pressing ahead with the construction of two naval bases on its south coast.

"Our intelligence analyzes all scenarios, including the worst," Reznikov said. "It notes that the likelihood of a large-scale escalation from Russia exists. The most likely time to reach readiness for an escalation will be the end of January."

Ukraine and its NATO allies have sounded the alarm about Russian troop movements near Ukraine's borders this year, sparking worries that a simmering conflict in eastern Ukraine could erupt into open war https://www.reuters.com/world/europe/qa-what-is-risk-war-between-russia-ukraine-2021-11-23.

Moscow has in turn accused Ukraine and the United States of destabilizing behavior and suggested that Kyiv might be preparing to launch its own offensive in eastern Ukraine, which the Ukrainian authorities strongly deny.

The deputy speaker of Russia's upper house of parliament denied Moscow was planning any offensive operation in eastern Ukraine and said Moscow would do all it could to prevent a major escalation in the region, the Interfax news agency reported.

Kremlin's foreign policy adviser Yury Ushakov was also dismissive. "It's nonsense, there is no any escalation. We have the rights to move the troops on our territory," he told reporters.

Ukraine has pressed its European Union and NATO allies this week to prepare a tough package of sanctions to ward off a Russia offensive.

Reznikov said Ukraine was pressing ahead with building the naval bases as part of a defense deal with Britain.

One base will be located in Ochakiv, to the west of the Crimea peninsula annexed by Russia in 2014, and the other in Berdyansk to the east of Crimea.

"Among the priorities are the missile program and the development of the fleet," Reznikov told parliament. "We are moving on to the practical stage of building two military bases - in Berdyansk and Ochakiv - and other contracts within the framework of agreements with the United Kingdom."

U.S. Secretary of State Antony Blinken warned Moscow on Thursday of the "severe costs" Russia would pay in case of an escalation, urging his Russian counterpart to seek a diplomatic exit from the crisis.

Blinken said it was likely that Presidents Joe Biden and Vladimir Putin would speak soon.

Work is under way to arrange a video call between them, the Kremlin said on Friday, a day after their top diplomats met to discuss Ukraine.

Ukraine's ties with Russia collapsed in 2014 after Moscow-backed forces seized territory in eastern Ukraine that Kyiv wants back. Kyiv says some 14,000 people have been killed in fighting since then.

Since the latest crisis started, Moscow has set out demands for legally binding security guarantees from the West that NATO will not admit Ukraine as a member or deploy missile systems there to target Russia.

Ukraine says Russia has no say over its ambitions to join the NATO alliance and dismissed any security guarantees as illegitimate.

"Escalation is a likely scenario, but not inevitable, and our task is to prevent it," Reznikov said. "We must make the price of escalation unacceptable for the aggressor."