UN: Bodies of at least 6 migrants found on Libyan coast 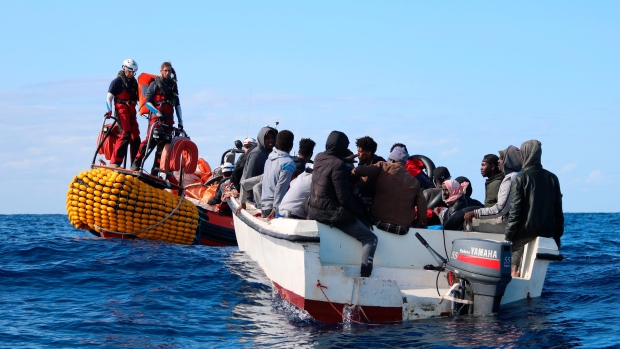 SOS Mediterranee team members from the humanitarian ship Ocean Viking approach a boat in distress with 30 people on board in the waters off Libya, Wednesday, Nov. 20, 2019. Ocean Viking, operated by Doctors Without Borders (Medecins Sans Frontiers MSF) anD SOS Mediterranee, has rescued another 30 people from a boat in distress off the Libyan coast, bringing the total number of migrants aboard the rescue vessel to 125. (Hannah Wallace Bowman/MSF via AP)

CAIRO - At least six bodies of Europe-bound migrants were found on Libya's Mediterranean coast on Friday, while another 90 were intercepted by Libya's coast guard, the U.N. migration agency said.

Libya has emerged as a major transit point for African and Arab migrants fleeing war and poverty to Europe. Most migrants make the perilous journey in ill-equipped and unsafe rubber boats.

The U.N.'s International Organization for Migration tweeted that the bodies washed up on the shores of the Libyan port of al-Khums.

In recent years, the EU has partnered with Libya's coast guard and other local groups to stem the dangerous sea crossings. Rights groups, however, say those policies leave migrants at the mercy of armed groups or confined in squalid detention centres rife with abuses.

Separately, Libya's eastern parliament Thursday accused the Italian government of violating the country's sovereignty by flying a drone near the frontlines of the ongoing war between the Tripoli-based U.N.-backed government and the east-based, self-styled Libyan National Army.

“The Libyan parliament demands that the Italian authorities provide an official explanation to this act of aggression on Libya's sovereignty,” read the statement issued by the LNA-allied parliament.

In a Wednesday press conference Ahmed al-Mosmari, the LNA spokesman said their forces had shot down an Italian drone near the city of Tarhouna, a town about 40 miles (60 kilometres) south of Tripoli.

In response, the office of Italy's Joint Chief of Staffs issued a statement Wednesday affirming that an Italian drone crashed in Libyan territory while it was on a mission to support efforts aimed at stemming migrant sea crossings. He added that the plane was following a flight plan that had been communicated in advance to Libyan authorities.

Since 2015, Libya has been divided between two governments, in the east and the west. In April, the LNA launched an offensive to capture Tripoli from the U.N.-backed government. While the LNA enjoys the support of France, Russia and Key Arab countries, the Tripoli-based government is backed by Italy, Turkey and Qatar.