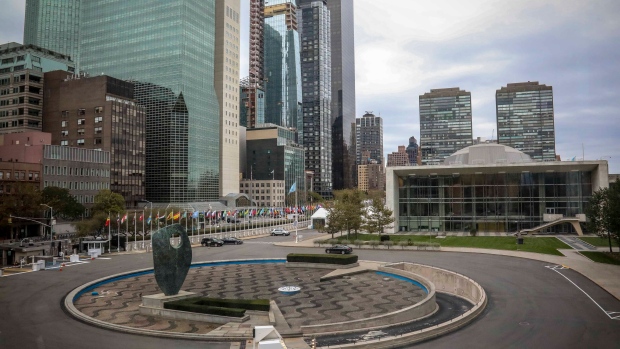 The United Nations headquarters iconic water fountain, constructed with funds donated by school children from across the United States in 1952, is currently off because of a cash crisis within the U.N., Friday Oct. 11, 2019. (AP Photo/Bebeto Matthews)

These are some of the measures Secretary-General Antonio Guterres has ordered effective Monday at all U.N. facilities and operations around the world to deal with the United Nations' worst cash crisis in nearly a decade.

The U.N. chief said in a letter to the heads of all U.N. entities circulated Friday that the emergency measures “will affect working conditions and operations until further notice.”

But she said $1.386 billion is owed for this year by 65 countries - including more than $1 billion by the United States.

Pollard said “the regular budget has been facing severe liquidity issues in recent years, with a growing downward trend whereby, each year, the situation becomes more dire than the year before,” Pollard said. “The cash deficits occur earlier in the year, linger longer and run deeper.”

For the second successive year, she said, the U.N. has exhausted “all regular budget liquidity reserves,” despite several measures it has taken to reduce expenditures.

Pollard said the payments received so far this year represent only 70 per cent of the total amount assessed, compared to 78 per cent at the same time last year, “resulting in a gap of $230 million.”

To fully implement the U.N. budget, she said, the U.N. would need to collect at least $808 million between October and December.

Pollard told a news conference that countries “have their own internal reasons ”for delaying paying their dues, “and for many of them it's their own political internal situations.”

The scale of assessments was revised at the end of 2018, making China the U.N.'s second-largest contributor behind the U.S. Some countries may not have made budgetary provisions for their increased dues and some, like the U.S., have different calendar years for their budgets, she said.

According to figures Pollard presented Friday, the United States owes $1.055 billion to the U.N.'s regular budget compared with $842 million at the same time last year. The U.S. also owes $3.7 billion to the separate budget for the U.N.'s 14 far-flung peacekeeping operations.

There was no immediate response to a request to the U.S. State Department for comment on when the Trump administration plans to pay its arrears.

According to Guterres' letter and Pollard, interpretation and U.N. services will be limited to official U.N. meetings on the calendar, which means the U.N. will no longer be able to serve meetings of regional and other groups. And the U.N. will not support meetings outside regular hours of 10am-1pm and 3pm-6pm.

The U.N. is also delaying publication of U.N. documents, putting on hold the translating of treaties and publications and cancelling all but essential travel.

It will not host receptions before 8 a.m. and after 6 p.m., and Guterres also said, escalators that are lightly used will be closed where there are elevators. And the popular Delegates Lounge at U.N. headquarters, which usually stays open until around 10 pm,, will close at 5pm, he said.

“Everywhere we're looking to see how we can reduce non-salary-related costs,” Pollard said.