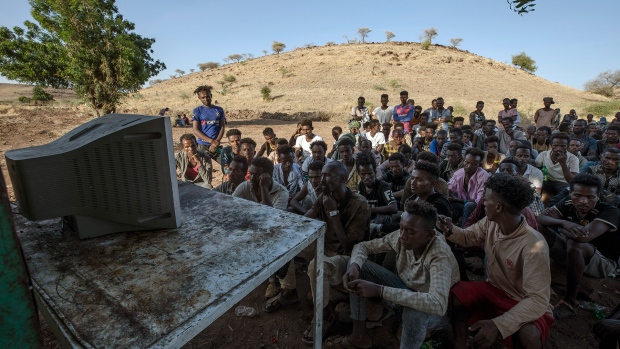 NAIROBI, Kenya - Ethiopia's situation is “spiraling out of control with appalling impact on civilians” and urgently needs outside monitoring, the United Nations human rights chief warned Wednesday. But Ethiopia is rejecting calls for independent investigations into the deadly fighting in its Tigray region, saying it “doesn't need a babysitter.”

And the U.N. secretary-general announced a new agreement with Ethiopia on badly needed humanitarian aid, a day after Ethiopia said its forces had shot at U.N. staffers doing their first assessment in Tigray. Antonio Guterres said joint assessments will occur “to make sure that there is full access to the whole of the (Tigray) territory and full capacity to start humanitarian operations.”

But it isn't the “unfettered,” neutral access the U.N. has sought for weeks.

There have been growing international calls for more transparency regarding the month-long fighting between Ethiopian forces and those of the fugitive Tigray regional government that is thought to have killed thousands, including civilians. At least one large-scale massacre has been documented by human rights groups, and others are feared.

Senior government official Redwan Hussein told reporters on Tuesday evening that Ethiopia will invite assistance only if it feels “it failed to investigate.” To assume it can't conduct such probes “is belittling the government,” he said.

Frustration is growing as the northern Tigray region remains largely cut off from the world, with food and medicines needed by the population of 6 million - some 1 million now thought to be displaced.

It also hides the extent of atrocities committed since Prime Minister Abiy Ahmed on Nov. 4 announced that fighting had begun with the Tigray People's Liberation Front, which dominated Ethiopia's government for nearly three decades before he came to power and sidelined it.

Each government now regards the other as illegal, as the TPLF objects to the postponement of national elections until next year because of the COVID-19 pandemic and sees Abiy's mandate as expired.

U.N. human rights chief Michelle Bachelet called the situation “exceedingly worrying and volatile” with fighting reported in areas surrounding the Tigray capital, Mekele, and the towns of Sheraro and Axum, “in spite of government claims to the contrary.”

“We have corroborated information of gross human rights violations and abuses including indiscriminate attacks against civilians and civilian objects, looting, abductions and sexual violence against women and girls,” Bachelet told reporters. “There are reports of forced recruitment of Tigrayan youth to fight against their own communities.”

However, she said, “we have been unable to access the worst affected areas.”

One concern has been the reported involvement of troops from neighbouring Eritrea, a bitter enemy of the TPLF. But the U.N. secretary-general said he had “confronted” Ethiopia's prime minister on that question and Abiy “guaranteed to me that they have not entered Tigrayan territory.”

Ethiopia's government objects to what it calls outside “interference” in the conflict, from efforts at dialogue to delivering aid, drawing on its history as the rare African country never colonized, a source of deep national pride.

Over the weekend, a week after the U.N. and Ethiopia signed an initial deal to allow humanitarian access, government forces shot at and detained U.N. staffers who allegedly broke through checkpoints while trying to reach areas where “they were not supposed to go.”

Crucially, the initial deal allowed aid only in areas under federal government control.

The shooting incident is “really costly” because it further delays help for Tigray residents who have been waiting for five weeks, U.N. humanitarian spokesman Saviano Abreu told The Associated Press.

He said the six-member U.N. team, detained in Humera and released two days later, was carrying out security assessments along roads that had been agreed upon with Ethiopia's government. Such assessments are crucial before aid can be sent in.

The top U.S. diplomat for Africa, Tibor Nagy, tweeted that “we strongly urge all parties to safeguard humanitarian ?workers in and around Ethiopia's Tigray region. We continue to urge immediate and unhindered humanitarian access ?throughout Tigray.”

Needs are critical. Mekele, a city of a half-million people, is “basically today without medical care,” the director-general of the International Committee for the Red Cross, Robert Mardini, told reporters on Tuesday. The Ayder Referral Hospital has run out of supplies, including fuel for generators.

“Doctors and nurses have been forced to make horrible life and death decisions,” Mardini said. “They suspended intensive care services and are really struggling to take care like delivering babies or providing dialysis treatment.”

A joint ICRC-Ethiopian Red Cross convoy with supplies for hundreds of wounded people is ready to go to Mekele, pending approval, he said. It would be the first international convoy to reach the city.

Overall, Mardini said, people in Tigray “have had no phone, no internet, no electricity and no fuel. Cash is running out. This of course adds to the tension.”

In neighbouring Sudan, nearly 50,000 Ethiopian refugees now take shelter. Some resist being moved to a camp away from the border, in the hope that missing family members, separated by the fighting, can be found.

“How can we go?” asked one refugee, Haile Gebremikeal. “If we can stay here for one or two months, if they give us a chance, we can look for our family or our family can look for us. There are no telephones, no internet. We don't have anything.”