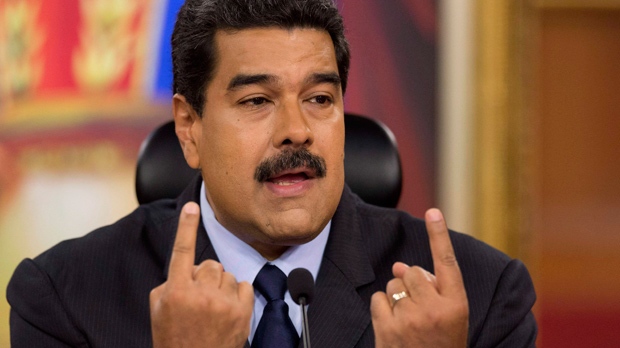 CARACAS, Venezuela -- The arrest of a top opposition leader in Venezuela unleashed fears of a wider crackdown on Thursday, even as members of the opposition issued renewed calls for weekend protests in a monthslong campaign to oust President Nicolas Maduro.

The Wednesday arrest of Edgar Zambrano, vice-president of the opposition-controlled National Assembly in Venezuela, was the latest move in a protracted, increasingly murky struggle between two camps vying for support of the military, which has seen some defections but whose loyalty to Maduro has preserved his grip on power.

Maduro's chief adversary, opposition leader Juan Guaido, portrayed the arrest and targeting of members of the assembly as acts of desperation by a government whose leaders don't know who to trust.

"They won't get us out of the streets," said Guaido, whose public appearance in Caracas reflected his belief that Maduro does not have the confidence to arrest him.

Maduro has appeared to let Guaido wage a campaign against him following U.S. warnings that there would be severe repercussions if he took action against his foe.

The United States says Russia-backed Maduro was elected illegitimately and that Guaido should lead Venezuelans to free elections after years of turmoil. Maduro describes Guaido as a collaborator in a U.S.-engineered coup plot.

Now, the government is chipping away at the National Assembly, the key Venezuelan institution demanding Maduro's resignation.

Diosdado Cabello, a leading political ally of Maduro, suggested Thursday that the government is being methodical in its battle with the opposition.

Venezuela's top court has announced investigations of Zambrano and nine other congress members for alleged roles in supporting Guaido's failed appeal for a military uprising on April 30, as others have come under increasing pressure.

"This is clearly fallout from the uprising last week. It amounts to a reassertion of hardliners within the Maduro government," said David Smilde, a senior fellow at the Washington Office on Latin America, a non-governmental group.

He suggested that factionalism within the embattled government was on display, with Maikel Moreno, head of the Supreme Tribunal of Justice, among those who were "trying to demonstrate their loyalty to the regime." Moreno had been identified by the U.S. as a conspirator in Guaido's failed scheme.

Smilde also said hardliners within the intelligence service, whose former chief broke ranks with Maduro, are "showing they are still on board."

Some 29 National Assembly members, or 25% of parliamentarians who oppose the government, have been persecuted by the pro-Maduro supreme court, according to Guaido.

Some members of the opposition-led congress have sought refuge in diplomatic missions, echoing moves made by 1970s-era dissidents scrambling for protection under the flags of other countries during the previous era of Latin American dictatorships.

Richard Blanco, an opposition congressman, on Thursday told VPItv, a local media outlet, that he had gone to the Argentine embassy. Another, Mariela Magallanes, is staying at the home of the Italian ambassador.

Opposition activist Leopoldo Lopez entered the home of the Spanish ambassador after he joined Guaido in the failed attempt to topple Maduro. Lopez was detained for anti-government protests in 2014 and had been under house arrest for two years before he was freed.

On Thursday, Miguel Rodriguez Torres, a former spy chief who became a government critic, was also transferred by military police to a maximum-security cell at a Caracas military base, his political movement said. Rodriguez Torres was arrested a year ago.