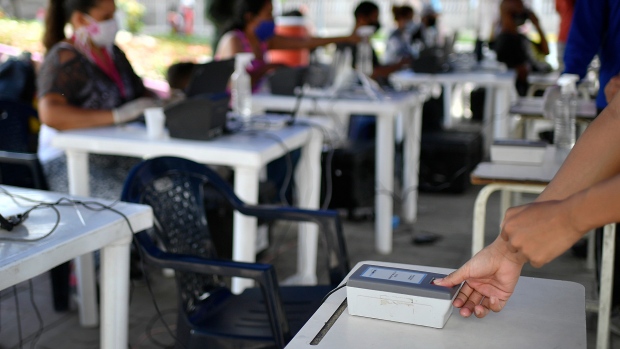 A woman places her thumb on a fingerprint scanner at a validation center to certify the authenticity of voter data in Caracas, Venezuela, Wednesday, July 29, 2020, amid the new coronavirus pandemic. Venezuela is scheduled for Dec. 6 midterm legislative elections, and thus far the opposition has indicated it will not participate. (AP Photo/Matias Delacroix)

A group of 27 opposition parties rejected the Dec. 6 election as “fraud.”

The vote would determine control of the National Assembly led by Guaido and the only branch of Venezuela's government that Maduro doesn't control.

“We will fight together to choose the fate of our country,” Guaido tweeted Sunday. “Now we must mobilize our majority that desires to live with dignity. Together we're going to beat the regime!”

The coalition has invited Venezuelans to unite behind a fresh push against what they call Maduro's “dictatorship.” It has also asked for international help in the campaign against Maduro.

Maduro didn't immediately respond Sunday to the opposition's decision, but he has said that it is important for his allies to win back control of the National Assembly. He has accused opposition leaders who control the congress of being manipulated by the United States.

Venezuela is in a political and economic crisis during which roughly 5 million people have fled the nation in recent years. The once-wealthy oil nation lacks basic goods, including a reliable supply of gasoline and a decent health care system, which is especially fragile as the coronavirus surges.

The opposition coalition rejected the December election, citing unfair conditions orchestrated by Maduro. They said 30 opposition lawmakers have been stripped of immunity guaranteed by law, while dozens more have been driven into exile and five are currently in jail.

The Supreme Court - loyal to Maduro - recently appointed a new elections commission, including three members who have been sanctioned by the U.S. and Canada, without participation of the opposition-led congress, as the law requires. The court also took over three leading opposition parties, appointing new leaders the opposition accuses of conspiring to support Maduro.

Opposition leaders say they will only participate in an election if there is a fairly seated election commission and qualified national and international observers overseeing all aspects of the voting process.

Guaido launched a campaign to oust Maduro early last year, but the socialist president still has control over the military and other major institutions. Maduro also has international support from Russia, China, Iran and Cuba.

It remains unclear how Guaido, following the election, would maintain his legitimacy as Venezuela's interim president, a position he claimed under the constitution in early 2019 from his position as head of the National Assembly.

President Donald Trump was among the first of more than 50 nations to support Guaido. His administration has hit Maduro with stiff sanctions designed to isolate him, while Trump's confidence in Guaido appears to be fading.

However, Elliott Abrams, Trump's special representative for Venezuela, said recently that the U.S. continues to support Guaido, and the administration will impose more pressure on Maduro.

The opposition leaders denied in their statement that they were abstaining from the upcoming congressional election.

“We're not abstaining,” the statement said. “There's no abstaining when they call something that doesn't qualify as an election.”