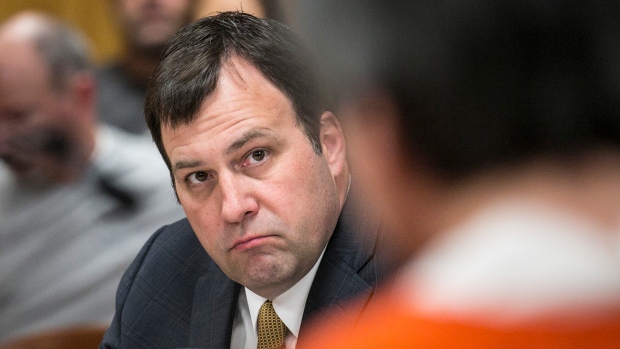 FILE - Sedgwick County District Attorney Marc Bennett looks toward Daniel Perez as Perez is sentenced in Sedgwick District Court in Wichita, Kan., on March 24, 2015. Bennett said this week that the state's "stand your ground law" prevented him from charging the local juvenile center's employees in the death of 17-year-old Cedric Lofton, who'd been restrained on the ground on his stomach, shackled and handcuffed for more than 30 minutes.(AP Photo/The Wichita Eagle, Mike Hutmacher, File)

WICHITA, Kan. (AP) - Surveillance video shows a Black 17-year-old struggling with staff at a Wichita juvenile center last fall before he died after he was restrained facedown for more than 30 minutes.

Sedgwick County released 18 video clips late Friday afternoon of what happened before Cedric Lofton was rushed to a hospital on Sept. 24. He died two days later.

The release of the clips followed Sedgwick County District Attorney Marc Bennett's announcement Tuesday that the state's “stand-your-ground” law prevented him from pressing charges because staff members were protecting themselves. He also said he struggled with whether an involuntary manslaughter charge was justified, but concluded it was not.

Sedgwick County's webpage crashed after the video was posted, making it temporarily inaccessible. But The Wichita Eagle posted screenshots of the encounter and several Wichita area television stations posted clips of some of the approximately two hours of footage, which didn't include audio.

One video shows several officers carrying Lofton into the Sedgwick County Juvenile Intake and Assessment Center while restrained in something called the WRAP, a device comprised of a locking shoulder harness, leg restraints and ankle straps. The sheriff's office describes it as a way to restrain a person who is “out of control” so that they don't hurt themselves or others.

But the 5-foot-10, 135-pound Lofton resisted the officers who responded to the home, assaulting at least one of them, Bennett's report said.

The WRAP was removed at the juvenile intake center, according to Bennett's report. An unrestrained Lofton walked out of his holding cell and then tried to grab a computer monitor from the intake counter.

The video shows him resisting attempts to place him back in the holding cell. At one point, he can be seen punching one of the juvenile detention employees in the head.

The video shows detention workers wrestle him into the cell and more employees showing up to help. The camera doesn't show a close angle of what is happening inside the cell.

Bennett's report said staff shackled Lofton's ankles and put him on his stomach on the floor. His report said Cedric was “mumbling” at times, repeated that he was Jesus and saying staff should kill themselves and that he would “hex” them. Staff noticed he wasn't breathing after they called to arrange for Loftin to be taken to a hospital for a mental health evaluation.

KSNW reported that after about 30 minutes facedown in the cell, video appears to show workers flip Lofton onto his back. They eventually start CPR and paramedics arrive.