KAILUA-KONA, Hawaii (AP) - The world's largest volcano oozed rivers of glowing lava Wednesday, drawing thousands of awestruck viewers who jammed a Hawaii highway that could soon be covered by the flow.

Mauna Loa awoke from its 38-year slumber Sunday, causing volcanic ash and debris to drift down from the sky. A main highway linking towns on the east and west coasts of the Big Island became an impromptu viewing point, with thousands of cars jamming the highway near Volcanoes National Park.

Anne Andersen left her overnight shift as a nurse to see the spectacle Wednesday, afraid that the road would soon be closed.

“It's Mother Nature showing us her face,” she said, as the volcano belched gas on the horizon. “It's pretty exciting.”

Gordon Brown, a visitor from Loomis, California, could see the bright orange lava from the bedroom of his rental house. So he headed out for a close-up view with his wife.

“We just wanted ... to come see this as close as we could get. And it is so bright, it just blows my mind,” Brown said.

The lava was tumbling slowly down the slope and was about 6 miles (10 kilometers) from the highway known as Saddle Road. It was not clear when, or if, it would cover the road, which runs through old lava flows. 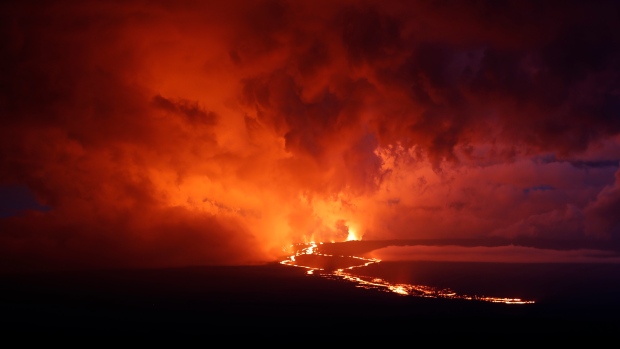 The road bisects the island and connects the cities of Hilo and Kailua-Kona. People traveling between them would need to take a longer coastal road if Saddle Road becomes impassable, adding several hours of drive time.

Ken Hon, scientist in charge at the Hawaiian Volcano Observatory, said at current flow rate, the soonest the lava would get to the road is two days, but it will likely take longer.

“As the lava flow spreads out, it will probably interfere with its own progress,” Hon said.

Kathryn Tarananda, 66, of Waimea set two alarms to make sure she didn't oversleep and miss her chance to see sunrise against the backdrop of eruptions at Mauna Loa.

“It's a thrill,” she said. “We're out in the middle of raw nature. It's awe inspiring that we live in this place. ... I feel really, really fortunate to be an islander.”

Mauna Loa last erupted in 1984. The current eruption is its 34th since written record keeping began in 1843. Its smaller neighbor, Kilauea, has been erupting since September 2021, so visitors to the national park were treated to the rare sight of two simultaneous eruptive events: the glow from Kilauea's lava lake and lava from a Mauna Loa fissure.

Abel Brown, a visitor from Las Vegas, was impressed by the natural forces on display. He planned to take a close-up helicopter tour later in the day - but not too close.

“There's a lot of fear and trepidation if you get really close to it,” Brown said. “The closer you get, the more powerful it is and the more scary it is.” 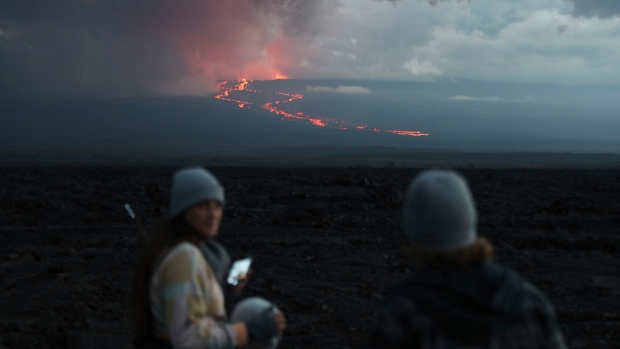 Officials were initially concerned that lava flowing down Mauna Loa would head toward the community of South Kona, but scientists later assured the public the eruption had migrated to a rift zone on the volcano's northeast flank and wasn't threatening communities.

The smell of volcanic gases and sulfur was thick along Saddle Road, where people watched the wide stream of lava creep closer.

Ige, who has dealt with multiple volcanic eruptions during his eight years as governor, said it's impossible to redirect Mauna Loa's molten rock as it heads for the highway.

“There is no physical way or technological way to change the course of where the lava flows,” Ige told a news conference. He remembers wishing that could be done in 2018, when Kilauea sent lava pouring across homes, farms and roads.

“But as we saw in that event, the power of Mother Nature and Madam Pele overwhelms anything that we can do,” Ige said, referring to the Hawaiian deity of volcanoes and fire.

Ige said that if lava does cross the highway, the Hawaii National Guard could help plan for alternatives and try to set up bypass routes.

Lava crossed the Mauna Loa Observatory access road Monday night and cut off power to the facility, Hon said. It's the world's premier station that measures heat-trapping carbon dioxide in the atmosphere. The federal government is looking for a temporary alternate site on the Hawaiian island and is contemplating flying a generator to the observatory to get its power back so it can take measurements again.

Meanwhile, scientists are trying to measure the gas emitted from the eruption.