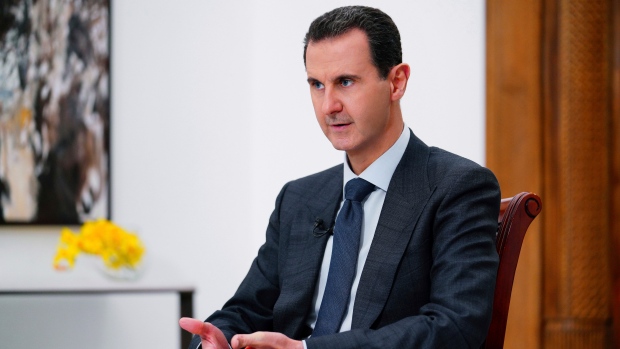 THE HAGUE, Netherlands - The global chemical weapons watchdog issued a report Wednesday blaming the Syrian air force for a series of chemical attacks using sarin and chlorine in late March 2017 on the central town of Latamneh.

The report marks the first time the Investigation and Identification Team, set up in 2018 by the Organization for the Prohibition of Chemical Weapons, has apportioned blame for an attack in Syria and will likely lead to fresh calls for accountability for the regime of President Bashar Assad.

OPCW Director-General Fernando Arias said it is now up to the organization, “the United Nations Secretary-General, and the international community as a whole to take any further action they deem appropriate and necessary.”

German Foreign Minister Heiko Maas said in a statement that Germany will push for accountability at the U.N. Security Council, where it is a non-permanent member, and at the OPCW.

“It is now up to the international community to react immediately and ensure that those responsible are brought to justice,” he said.

Exactly how that could happen is unclear. Syria is not a member state of the International Criminal Court, meaning crimes committed on its territory by Syrian nationals cannot be prosecuted at the global court.

The Syrian government has consistently rejected repeated allegations that it launched chemical weapons attacks during the country's grinding civil war. It did not immediately comment on the report released Wednesday.

The report noted that authorities in Damascus repeatedly refused to co-operate with the investigation.

The co-ordinator of the investigative team, Santiago Onate-Laborde, said in a statement the team concluded that “there are reasonable grounds to believe that the perpetrators of the use of sarin as a chemical weapon in Latamneh on 24 and 30 March 2017, and the use of chlorine as a chemical weapon on 25 March 2017 were individuals belonging to the Syrian Arab Air Force.”

The investigation included interviews with witnesses, analysis of samples taken from the sites of the attacks, review of symptoms reported by those affected and medical staff along with examination of imagery including satellite images.

The small town, that was under rebel control at the time of the attacks, lies close to a strategically important highway.

The detailed report, running to 82 pages including annexes, said that on March 24 a Su-22 military plane from the 50th Brigade of the 22nd Air Division of the Syrian Arab Air Force left Shayrat airbase and dropped an M4000 aerial bomb loaded with sarin nerve agent on southern Latamneh.

It said the bomb landed in agricultural land, killing livestock and birds and injuring some 16 people.

A day later, a Syrian air force helicopter dropped a cylinder that smashed through the roof of the town's hospital, ruptured and released chlorine. The report said investigators “obtained information that up to three persons died and that at least 32 persons were injured” in the attack. One of the victims was a surgeon who was carrying out an operation at the time of the attack.

On March 27 a Su-22 plane dropped an M4000 aerial bomb containing sarin in southern Latamneh, affecting at least 60 persons, none of whom was killed.

In his statement, Onate-Laborde said: “Attacks of such a strategic nature would have only taken place on the basis of orders from the higher authorities of the Syrian Arab Republic military command. Even if authority can be delegated, responsibility cannot. â€¦ In the end, the IIT was unable to identify any other plausible explanation.”

The OPCW investigative team was established after Russia blocked the extension of a joint UN-OPCW investigation mechanism that was set up in 2015 and accused Syria of using chlorine in at least two attacks in 2014 and 2015 and of unleashing the nerve agent sarin in an aerial attack on Khan Sheikhoun in April 2017 that killed about 100 people.

Syria joined the OPCW in 2013 after it was blamed for a deadly poison gas attack in a Damascus suburb. Assad's government then declared some 1,300 tons of chemical weapons and precursor chemicals that were subsequently destroyed in an unprecedented international operation.

However, the organization still has unanswered questions regarding Syria's initial declaration and whether it wholly disposed of its chemical weapons stockpile.

“Today's confirmation that the Syrian military `at the highest level' was responsible for sarin and chlorine attacks in 2017 should remove any doubt that the Syrian state deliberately used chemical weapons against its own people,” the group's UN director Louis Charbonneau said in a statement. “The OPCW's conclusions should be used to support criminal justice for the individuals responsible.”