WHO 'disappointed' at Chinese delays letting experts in 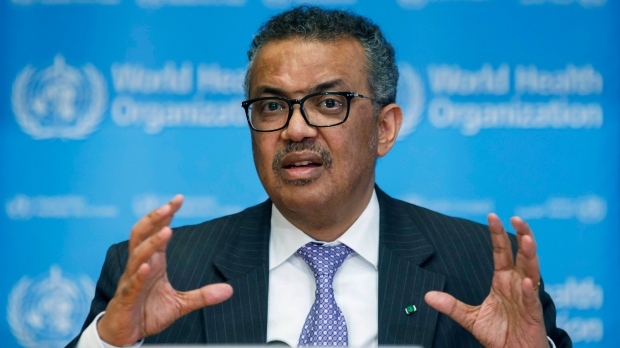 In this Monday, March 9, 2020 file photo, Tedros Adhanom Ghebreyesus, Director General of the World Health Organization speaks during a news conference, at the WHO headquarters in Geneva, Switzerland. (Salvatore Di Nolfi/Keystone via AP, file)

GENEVA - The head of the World Health Organization said Tuesday that he is “disappointed” Chinese officials haven't finalized the permissions to allow a team of experts into China to examine the origins of COVID-19.

WHO Director-General Tedros Adhanom Ghebreyesus, in a rare critique of Beijing, said members of the international scientific team began departing from their home countries over the last 24 hours as part of an arrangement between WHO and the Chinese government.

“Today, we learned that Chinese officials have not yet finalized the necessary permissions for the team's arrival in China,” Tedros said during a news conference in Geneva.

“I'm very disappointed with this news, given that two members had already begun their journeys and others were not able to travel at the last minute, but had been in contact with senior Chinese officials,” he said.

Tedros said he “made it clear” that the mission was a priority for the U.N. health agency, and that he was “assured that China is speeding up the internal procedures for the earliest possible deployment.”

“We are eager to get the mission underway as soon as possible,” he said.

The experts drawn from around the world are expected to visit the city of Wuhan, which is suspected as the place that the coronavirus first emerged over a year ago.

Dr. Michael Ryan, the WHO's emergencies chief, said the deployment had been expected to start Tuesday but that the needed approvals had not yet been granted, including for visa clearances.

The Chinese government has been strictly controlling all research at home into the origins of the virus, an AP investigation found, and state-owned media have played up reports that suggest the virus could have originated elsewhere. Chinese Foreign Minister Wang Yi said recently that “more and more research suggests that the pandemic was likely to have been caused by separate outbreaks in multiple places in the world.”

The U.N. health agency came in for searing criticism from President Donald Trump and other U.S. officials over its alleged deference to and excessive praise of China's handling of the initial outbreak.

Ryan said Tedros had “taken immediate action” and spoken with unspecified senior Chinese officials, and “has fully impressed upon them the absolute critical nature of this.”

“We hope that this is just a logistical and bureaucratic issue that can be resolved very quickly,” Ryan added.

The WHO chief met with Chinese President Xi Jinping as the pandemic was emerging early last year.