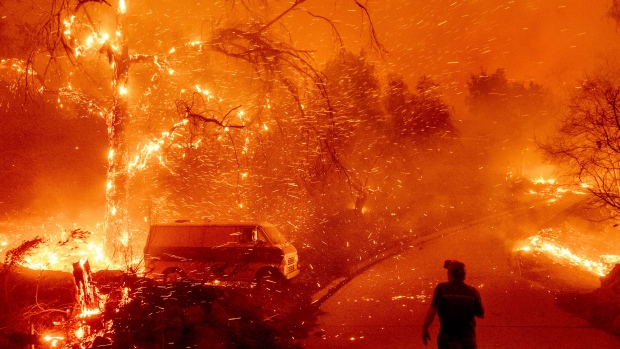 LOS ANGELES - Powerful gusts pushed flames from a wildfire through Southern California canyons on Thursday, one of several blazes that burned near homes and forced residents to flee amid elevated fire risk for most of the region that prompted utilities to cut off power to hundreds of thousands.

“When crews arrived it was a fully engulfed house and the winds were extremely strong and they pushed flames into the vegetation,” said Colleen Windsor, a spokeswoman for the county's Fire Authority.

The fire grew to more than 11 square miles (29 square kilometres) and blanketed a wide area with smoke and ash.

Crews struggled in steep terrain amid unpredictable Santa Ana winds that sent flames racing across major roads. Two firefighters were hospitalized after being treated on scene for injuries, said Fire Chief Brian Fennessy. He said their condition was not immediately known.

Some homes were damaged in the fire and possibly destroyed, Fennessy said. He said he couldn't immediately say how many homes were affected.

Evacuations were ordered for thousands of residents of canyon and foothill neighbourhoods near the city of Lake Forest - although some orders were later lifted - and residents of other nearby areas were told to be ready to get out.

There was no containment of the fire.

Numerous studies have linked bigger wildfires in America to climate change from the burning of coal, oil and gas. Scientists have said climate change has made California much drier, meaning trees and other plants are more flammable.

The Bond Fire about 50 miles (80 kilometres) southeast of Los Angeles is burning near the same area of October's Silverado Fire, which forced tens of thousands of people to evacuate.

Kolbi Winters said helicopters flew overhead throughout the night and before dawn she got a warning she might need to evacuate her home. A few hours later, she got an order to get out and packed up and headed to a hotel for the second time in recent months, where she'll stay with her partner, dog and cat.

“I had one month literally to enjoy myself before another fire happened,” Winters said. “If this continues happening, and we don't take care of this, one day, I'm not going to have a home.”

The new blaze broke out as Southern California utilities cut the power to tens of thousands of customers to avoid the threat of wildfires during the notorious Santa Anas.

Red flag warnings of extreme fire danger through Saturday were in place because of low humidity, bone-dry brush and the winds, which sweep down from the interior, the National Weather Service said.

Utilities in the populous region began cutting power Wednesday to customers as a precaution to prevent gusts from blowing tree limbs into electrical equipment or knocking down power lines, which have sparked devastating wildfires in recent years.

Southern California Edison had cut power to nearly 50,000 homes and businesses by Thursday evening and was considering de-energizing lines serving about 190,000 other customers in seven counties throughout the windy period, which could last into Saturday.

It was one of the utility's largest precautionary blackouts.

San Diego Gas & Electric pulled the plug on about 55,000 customers with another 40,000 in the crosshairs.

“We recognize losing power is disruptive, and we sincerely thank our customers for their patience and understanding,” the utility said.

A few miles to the north, a blaze near Corona Municipal Airport shut down State Route 71 and had residents getting ready to flee.

Evacuations were ordered when a small wildfire broke out near the rural community of Nuevo in Riverside County, about 50 miles (80 kilometres) to the east.

And to the south, a small blaze in San Diego County threatened about 200 homes and prompted evacuations before firefighters managed to contain 50 per cent of it. At least one structure was destroyed and six others were damaged, according to 10 News San Diego.

California already has experienced its worst-ever year for wildfires. More than 6,500 square miles (16,835 square kilometres) have been scorched, a total larger than the combined area of Connecticut and Rhode Island. At least 31 people have been killed and 10,500 homes and other structures damaged or destroyed.