With warming, get used to blackouts to prevent wildfires 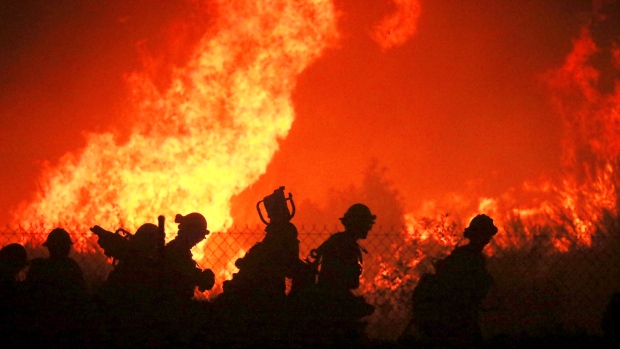 WASHINGTON - Expect more preventative power blackouts in California as the climate gets hotter and drier and the wildfire season gets nastier and longer, scientists say.

The Golden State already is fire-prone with lots of dry plants and woodlands - but add high winds that can knock down power lines or cause them to spark, then watch out, wildfire experts say.

The darker outlook hits close to home for Stanford University climate scientist Chris Field, who like so many others had his electricity cut off Thursday by Pacific Gas & Electric Co.

“At this point we don't have a better option for reducing risk than shutting electricity off,” Field said. “It's better than having a whole community burn down.”

Mike Flannigan, a professor of wildland fire at the University of Alberta in Canada, said “the new reality” is that there will be more fires with drier and hotter weather from man-made global warming. So he said power shutdowns like those by California utilities are more likely to happen to try to avoid catastrophic fires with losses of lives and property like those that plunged PG&E into bankruptcy.

Flannigan said there is some build-up of certain trees and plants as fuel, but that's usually not a big problem. “It's just fire weather is getting more severe,” he said. “Fuels are drier, which means more fuel to burn. The more fuel to burn means more intense” fires.

The area burned in California wildfires has increased fivefold from 1972 to 2018 and that's been “driven by drying of fuels promoted by human-induced warming,” according to a June study in the scientific journal Earth's Future.

Summer “warm season” days in California have increased in temperature by 2.5 degrees (1.4 degrees Celsius) in the past century, the study said.

“Mostly we see a strong summertime effect,” study co-author Jennifer Balch, a fire scientist at the University of Colorado, said in an email. “But warmer temperatures in the fall also dry out fuels and make big, wind-driven wildfires more likely.”

“Power outages are just a Band-Aid on the problem of human ignitions,” Balch said. “People provide the ignitions for 84% of our nation's wildfires. And it's not just downed power lines that cause sparks. Campfires, burning debris, driving off the side of the road, electrical equipment, and fireworks are all ways that we start fires.”

California's fire season traditionally started in fall but the higher temperatures and long stretches of little precipitation have led to wildfires becoming more common throughout the year. It's especially dangerous in fall, when high winds can knock down power lines and spark fires that feed on the vegetation that dried out during the hot summer months.

The key, said Field of Stanford, is the time between the start of the high winds and the start of winter rainstorms. If it takes too long, the fire potential worsens.

The winds that come down mountains warm and dry out and the speed increases, Heffernan said.

They are common regular and natural weather phenomenon, but scientists will likely be looking to see if there are increasing or decreasing trends that can be connected to man-made climate change, Heffernan said.

A January 2019 study predicts that the downslope winds in Southern California should be less frequent, but just as strong, as climate change progresses.