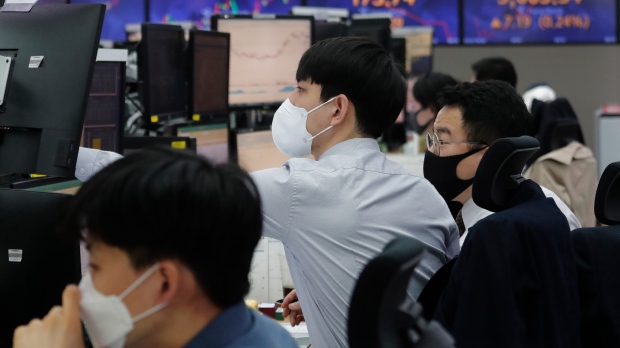 BANGKOK - World shares were mixed on Thursday and U.S. futures edged higher ahead of the release of the latest unemployment figures.

Oil prices fell back after surging 6% on Wednesday on concerns over disruptions to shipping from a skyscraper-sized cargo ship wedged across Egypt's Suez Canal.

Efforts continue to free the Ever Given, a Panama-flagged ship that carries cargo between Asia and Europe that ran aground Tuesday in the narrow, man-made canal dividing continental Africa from the Sinai Peninsula.

The U.S. Securities and Exchange Commission said Wednesday it was adopting an interim rule that some foreign companies must provide documentation to show they are not owned or controlled by a government entity. The requirement mainly is expected to affect Chinese companies listed on U.S. exchanges and the SEC statement triggered selling of such companies in Hong Kong.

“Tech giants from Tencent and Alibaba hit the plunge pool after U.S. regulators rekindled threats to toss China's most prominent corporations off U.S. bourses, compounding concerns of a widening domestic antitrust crackdown,” Stephen Innes of Axi said in a commentary.

India's Sensex lost 1% and shares were higher in Taiwan and most of Southeast Asia apart from Jakarta.

Investors are keeping an eye on efforts to combat the economic impact of the coronavirus pandemic. The Biden administration is considering up to $3 trillion in additional spending on infrastructure, green energy, and education.

Treasury Secretary Janet Yellen told the Senate she believes the U.S. government has more room to borrow, but said higher taxes would likely be required in the long run to finance future spending increases. That spooked some investors.

Meanwhile, Federal Reserve Chair Jerome Powell reiterated that a recent jump in the yield on the 10-year U.S. Treasury, which soared from less than 1% at the beginning of the year to 1.63% Thursday, was mostly a sign of confidence among investors that the economy is improving.

Benchmark U.S. crude oil lost $1.10 to $60.08 per barrel in electronic trading on the New York Mercantile Exchange. Brent crude, the international standard for pricing oil, lost $1.00 to $63.25 per barrel.