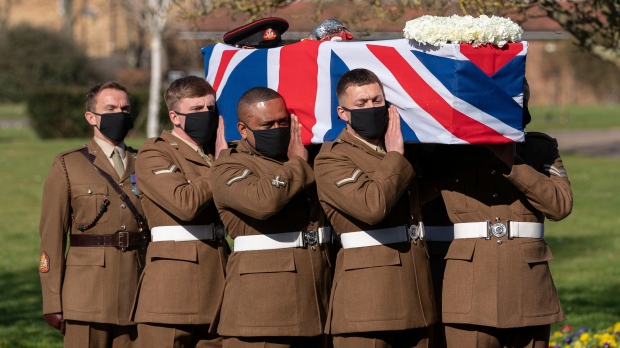 The coffin of Captain Sir Tom Moore is carried by members of the Armed Forces during his funeral, at Bedford Crematorium, in Bedford, England, Saturday, Feb. 27, 2021. Tom Moore, the 100-year-old World War II veteran who captivated the British public in the early days of the coronavirus pandemic with his fundraising efforts died, Tuesday Feb. 2, 2021. (Joe Giddens/Pool Photo via AP)

LONDON - Church bells rang out and a World War II-era plane flew Saturday over the funeral service of Captain Tom Moore to honour of the veteran who single-handedly raised millions of pounds for Britain's health workers by walking laps in his backyard.

Soldiers performed ceremonial duties at the private service for Moore, who died Feb. 2 at age 100 after testing positive for COVID-19. Captain Tom, as he became known, inspired the U.K. during the first months of the coronavirus pandemic with his humble endeavour that raised almost 33 million pounds ($46 million) for Britain's National Health Service last year.

The private service was small, attended by just eight members of the veteran's immediate family. But soldiers carried his coffin, draped in the Union flag, from the hearse to a crematorium and formed a ceremonial guard. Others performed a gun salute before a C-47 Dakota military transport plane flew past.

“Daddy, you always told us `Best foot forward' and true to your word, that's what you did last year,” Moore's daughter Lucy Teixeira said at the service. “I know you will be watching us chuckling, saying `Don't be too sad as something has to get you in the end.”'

His other daughter, Hannah Ingram-Moore, said the world was “enthralled” by her father's “spirt of hope, positivity and resilience.”

“They, too, saw your belief in kindness and the fundamental goodness of the human spirit,” she said.

The service featured music that reflected the man being honoured, opening with the rendition of “You'll Never Walk Alone” that Moore recorded for charity with Michael Ball and the NHS Voices of Care Choir. The song reached number one in the U.K. singles charts last April.

Singer Michael Buble recorded a version of “Smile” for the funeral, and as requested by Moore, Frank Sinatra's “My Way” was played. A bugler sounded “The Last Post” to close the service.

A church in Bedfordshire, England, where the family is based, rang its bell 100 times in Moore's honour. A post on Moore's Twitter account invited his admirers to remember him Saturday with a cup of tea and a slice of Victoria sponge cake

Moore, who served in India, Burma and Sumatra during World War II, set out to raise a modest 1,000 pounds for Britain's NHS by walking 100 laps of his backyard by his 100th birthday last year. But donations poured in from across Britain and beyond as his quest went viral, catching the imagination of millions stuck at home during the first wave of the pandemic.

His positive attitude - “Please remember, tomorrow will be a good day” became his trademark phrase - inspired the nation at a time of crisis. Prime Minister Boris Johnson described him as a “hero in the truest sense of the word.?

He was knighted by Queen Elizabeth II in July in a socially distanced ceremony at Windsor Castle, west of London.

A Dakota performs a fly-pass at the funeral of Captain Tom Moore, in Bedford, England, Saturday, Feb. 27, 2021. Tom Moore, the 100-year-old World War II veteran who captivated the British public in the early days of the coronavirus pandemic with his fundraising efforts died, Tuesday Feb. 2, 2021. (Joe Giddens/Pool Photo via AP)