'You can't relax': NY deaths up, but hospital trends hopeful 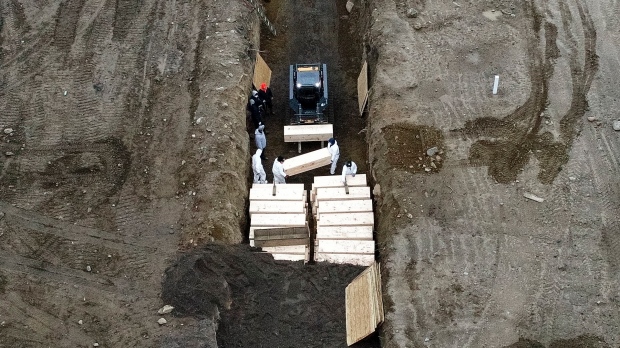 Workers wearing personal protective equipment bury bodies in a trench on Hart Island, Thursday, April 9, 2020, in the Bronx borough of New York. On Thursday, New York City's medical examiner confirmed that the city has shortened the amount of time it will hold on to remains to 14 days from 30 days before they will be transferred for temporary internment at a City Cemetery. Earlier in the week, Mayor Bill DeBlasio said that officials have explored the possibility of temporary burials on Hart Island, a strip of land in Long Island Sound that has long served as the city's potter's field. (AP Photo/John Minchillo)

NEW YORK - New hospitalizations are the lowest they've been since the coronavirus crisis hit New York. The volume of 911 calls has fallen. Ventilators remain in supply.

Even as the state reeled Thursday from its deadliest day of the pandemic, health professionals and public officials saw signs they are averting the abyss they feared, of too many patients, too few beds, and doctors forced to choose who lives and dies.

“There is a light at the end of the tunnel in terms of the volume of patients and how sick people are,” said Dr. Jolion McGreevy, medical director of Mount Sinai Hospital's emergency department.

“It's getting better, but it's not like it's going to just drop off overnight. I think it's going to continue to slowly decline over the next weeks and months.”

New York Gov. Andrew Cuomo on Thursday announced another 799 deaths from the virus, the third consecutive day of a record-breaking increase. The state's death toll now stands at more than 7,000.

But hospital admissions across the state ticked up by a net of just 200 patients, down sharply from the crisis-high increase of 1,427 new patients on April 2. New intensive care admissions were also down. In all, about 18,000 people were hospitalized with the virus.

The tide of 911 calls overwhelming the city's emergency response system has started to ease. Requests for ambulance service fell from a record 6,527 calls on March 30 to 5,017 on Wednesday - still far above normal but the lowest total in two weeks.

“Today we can say that we have lost many of our brothers and sisters, but we haven't lost anyone because they couldn't get the right and best health care that they could,” Cuomo said.

In New York City, the once-desperate need for ventilators has eased a bit as new supplies pour in from around the globe.

China this week sent 1,000 ventilators to New York. California, Oregon and Washington lent its extra ventilators to the state and a Florida company shipped in 2,400 respiratory therapy machines that can be converted into ventilators.

At Long Island Jewish Medical Center in Queens, a chime is sounded each time a patient is discharged. More than 450 have gone home so far.

“We are starting to see a slowing,” Corwin said. But, he warned, “now is not the time to take our foot off the gas on social distancing measures.”

Cuomo and de Blasio both stressed Thursday that New York was not “out of the woods,” urging people to keep isolating themselves indoors.

He noted that in other places, measures taken to control the spread of the virus have appeared to be working, only to have illnesses come roaring back.

Health care workers continue to protest what they say are inadequate supplies of personal protective equipment.

De Blasio said some restrictions could be lifted in May or June, but only if testing capacity expands and people follow the rules.

Reinforcing the need for precautions, state health officials said they now support all New Yorkers wearing cloth face coverings when they go out in public, especially in areas of “significant community transmission.”

But with the pace of hospitalizations declining, plans for even more emergency treatment centres have been scaled back. Cuomo said the state isn't planning to create any more temporary hospitals beyond those completed or nearly finished.

A Navy hospital ship and a temporary hospital set up inside Manhattan's Javits Convention Center that were initially expected to care for as many as 3,000 patients have had fewer than 200 so far, Pentagon officials said.

Plans for a field hospital at Manhattan's Cathedral of St. John the Divine were shelved by Mount Sinai Health System and the evangelical Christian organization Samaritan's Purse.

Between the slowing flow of patients and a wartime-like effort to build up ventilators stocks and hospital beds, doctors have been spared from making life-and-death decisions on rationing care.

That seemed like an inevitability just a few weeks ago, when hospital operator NYU Langone Health provided internal guidance to emergency room doctors about how to allocate ventilators if there weren't enough to go around.

“The good news is we never got to that really, truly crisis mode where we're out of ventilators,” Dr. Robert Femia, the chairman of the emergency medicine department, told The Associated Press. “Technically, we didn't get close - but we were concerned about it.”