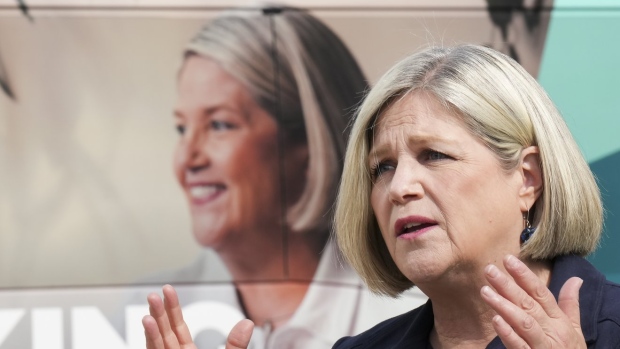 NDP leader Andrea Horwath makes a campaign stop in Toronto on Wednesday, May 25, 2022.

The votes will be tallied up a week from today in the 2022 Ontario election. The platforms – such as they are – are out. The leaders have spent three weeks making their policy case to voters. For the party war rooms it’s now about strategy.

What policy to highlight and sell to voters? What ridings are in play? How to use the advertising dollars to best effect? How to organize local campaigns to get voters to the polls?

The polls are quite consistent. On Thursday, Progressive Conservative Party support is sitting at just over 35 per cent. The Liberal Party is now closing in on 30 per cent and the NDP hovers around 23 per cent with the Green party at six per cent. A lot of the “safe” seats in the various projections are held by the PCs. So it will take a last week campaign tsunami to knock Doug Ford and the PCs out of first place.

Simple math will lead you to conclude that by splitting what is called the “progressive” vote the left of centre opposition parties are giving the Progressive Conservatives a path to a possible second majority government in Ontario.

On Thursday both the NDP and Liberals repeated commitments related to improving healthcare and raising taxes on the wealthiest Ontarians. Nothing new but driving home their healthcare offers to voters.

And while the two parties have significant policy differences both want to wear the progressive mantle and win over as many anti-Ford voters as possible. So when it comes to strategy the NDP and the Liberals are spending day after day trying to prove the “big Mo” – the momentum - is coloured orange or red.

As the Official Opposition in the last legislature the NDP should have an easier time convincing voters that it is the party best positioned to defeat the PCs and Doug Ford. In interviews, Horwath reminds voters that the NDP finished first or second in 100 or the 124 ridings in 2018. Horwath can make the point that, unlike the Liberals, the NDP caucus has the experience to govern.

Today, the NDP released a television advertisement to motivate those momentum vibes. It features a fired up Horwath at an NDP rally. Horwath’s final line asks voters to “Come together behind the team that is strong, ready and working for you.” It’s the core message the NDP will be selling in the countdown to the election.

The Liberal strategy is to paint the party as new. Steven Del Duca talks about the “new” Liberal Party with a “new” team. Del Duca wants voters to believe the Liberals have the momentum and is the party to stop Ford. In Richmond Hill, Del Duca said voters “know they have one option to stop Ford.” Casting the Liberal Party as the government in waiting is a bit of an overreach for Del Duca but the hard Liberal pitch will get louder as voting day nears.

The Liberals will release a new series of television advertisements too. Theirs take on the Conservative record of cutting social programs. The Liberal pay off line is “Don’t forget. The Conservatives cut. You can stop them. Vote Liberal.”

The fight is on for those progressive voters. With less than a week to go the most likely result is that voters will stick with their first choice and that means the NDP, Liberal and Green vote will split and leave the Progressive Conservative party with the most seats.