TORONTO - A Toronto man who appeared in court Wednesday on charges related to G20 security is being described as a highly skilled Internet expert who was critical of the summit's $1-billion security tab.

Sonne was arrested Tuesday, the same day police raided his home in an affluent neighbourhood in the city's north end.

The Crown has said the investigation is ongoing and police will only say it relates to G20 summit security. But one person who knows Sonne says he's hoping the situation is just a misunderstanding.

Technology expert Jesse Hirsh said he spent a couple of hours with Sonne in early May at a Toronto meeting of the Surveillance Club, an informal group of people interested in discussing research in the area of surveillance.

At the meeting Sonne spoke for about a half-hour, and outlined his plan to listen-in on police communications at the summit, Hirsh said.

"He was just going to do what any assignment desk producer does at CP24 or CBC," Hirsh said.

"He would go to Radio Shack, get your average radio band scanner and listen to the public police band."

Hirsh said Sonne was critical of the $1 billion in security spending for the G8 and G20 summits and wanted to hold security forces accountable by documenting and allowing the public to see and understand where money was being spent.

"The optimist in me is hoping this is a political stunt that got out of control," Hirsh said.

Sonne is due back before a judge on Saturday for a bail hearing, in a special court set up to deal with cases related to the G20 summit.

Room 203 at the Ontario Court of Justice building in the city's northwestern outskirts is known as the major crimes courtroom. Large trials are heard in the room equipped with 14 dockets, three flat-screen televisions and a separate viewing room for spectators.

The special court will be in operation daily until next Wednesday, from 2 until 9 p.m., everyday including Saturday and Sunday.

Sonne's lawyer, Kevin Tilley, was listed as a speaker at a June 8, 2010, press conference of Toronto Community Mobilization, a network of Toronto organizations who oppose the G20.

But Tilley denied his activism has anything to do with his client's case.

"Mr. Sonne has retained us on his own completely independent of my involvement with the G20." 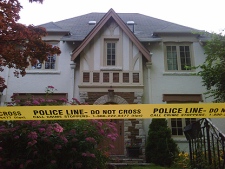 Police tape surrounds the home of a man charged in connection with a G20 investigation. (CP24/Mathew Reid)