TORONTO - A British Columbia boy confined to a New York hotel bed after his customized wheelchair was dismantled while travelling with Air Canada had it repaired and returned Thursday following a Twitter campaign.

Tanner Bawn, 10, has Duchenne Muscular Dystrophy and is completely dependant on his $15,000 wheelchair to move around.

He was heading from Toronto to New York to watch a group of tutu-wearing bloggers, including his aunt, take part in Tutus for Tanner, a charity run planned Friday in Central Park to raise money for the boy.

His family left Toronto on Wednesday wearing brightly coloured tutus, excited for the big trip, which Bawn has dubbed one of his final wishes as he struggles with the deadly disease. His aunt said Bawn's health has declined rapidly over the past year.

When the group arrived at New York's LaGuardia Airport they discovered the wheelchair had been dismantled, seemingly beyond repair.

"They killed it," Catherine Connors, Bawn's aunt, said from New York as she recalled what the chair looked like after the flight.

"Some pieces were just removed, some were broken off. It had been laid on its side, and it can't. It's a power chair. It was trashed."

Connors immediately took to Twitter, first asking people for Air Canada phone numbers, and then explaining what happened. The online campaign created a flurry of reaction, making it one of the "trending" topics in Canada.

By Thursday afternoon the family had the chair back.

In a statement, Air Canada said an all-night repair service in New York managed to fix the chair. The company also said it would make one of Bawn's wishes come true.

"We know Tanner's No. 1 personal wish is to go to Disney World, so we'll be making that happen for him and his cousins," said spokesman Peter Fitzpatrick.

"We are very disappointed with how this has transpired," added Fitzpatrick, who said the company will be looking into the incident.

The family said they spoke to an Air Canada official at the airport Wednesday, who gave the boy a regular wheelchair and promised that a temporary power wheelchair, one that could support him properly, would be delivered to their hotel room by 6 p.m.

Bawn never received the chair and was confined to his bed, missing a Broadway show he had tickets for.

"He was basically trapped," said Connors, her voice cracking as she tried to hold back tears.

"That he wasn't able to hold himself up in the chair was frightening for him. He was frustrated being confined to the bed."

The airline said it instructed the repair company to send an electric chair to the hotel, but it was never delivered.

Among Bawn's wishes is to spend his last days at home. The money will help his single mother renovate their Kamloops, B.C., basement, so they can have live-in care for Bawn. 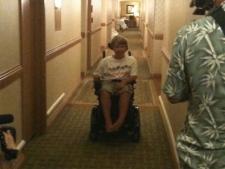 In this file photo, Tanner Bawn rides in his new wheelchair as seen in this image courtesy Catherine Connors, Thursday, Aug. 5, 2010.