Air Canada workers walk off the job at Pearson

Air Canada ramp crews have walked off the job and are currently staging a demonstration at Terminal 1 in the Pearson International Airport, the Greater Toronto Airports Authority's Scott Armstrong has confirmed.

Peel police confirmed that six or seven officers were monitoring the scene. There have been no reports of any problems.

The federal government recently passed legislation banning strikes or lockouts at Air Canada, arguing the move was needed to protect the national economy. 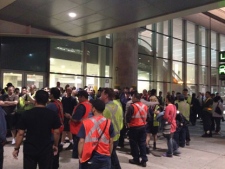