TORONTO - Toronto Blue Jays general manager Alex Anthopoulos is lashing out at ESPN for a report that suggests the team is stealing signs from their rivals.

The allegations, which appeared in an article inside ESPN The Magazine Wednesday, were made by four anonymous players from a visiting team.

"This whole thing is stupid. It's unbelievable that we are even sitting here talking about this, but I understand it is a story," Anthopoulos told reporters at a hastily organized press conference Wednesday. "There is zero truth to it."

According to ESPN, the players claim they spotted a man relaying signals from the right-field seats at Rogers Centre during the 2010 season.

The players, who were seated in the right-field bullpen at the time, said that the man was seated in a spot where he could see the visiting catcher's signals to the pitcher on the mound.

If the catcher called for anything but a fastball – trickier pitches such as a breaking ball or a curveball, for example – the man would raise his arms to alert the Blue Jays batter in the batter's box, the unnamed players claim.

On Wednesday Anthopoulos said if the allegations were true, ESPN would have been able to find a former team employee to collaborate them.

"There must be one disgruntled Blue Jay out there," he said. "Baseball is a small fraternity and I don't think it is too hard to find a former coach, a former player, a former front office executive, a former clubhouse guy, a former field guy, anyone."

A spokesman for Major League Baseball said no team has filed a complaint with its office.

Sign stealing, especially when it's done with help outside the field, goes against baseball's unwritten rules and is considered to be cheating.

Blue Jays catcher J.P. Arencibia was quick to slam the report on Twitter earlier in the day.

"Just read the dumbest article on ESPN about us getting signs? I'm hitting 200 and we get signs at home, that makes sense?" Arencibia tweeted.

He followed that tweet with this message: "What's next? Man on CN Tower edge walk was seen relaying signs to blue jay hitters." 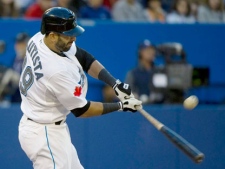