JERUSALEM - Violent attacks against Jews worldwide more than doubled last year, fuelled by a Muslim backlash in Europe in the aftermath of Israel's invasion of Gaza, according to a report released Sunday.

The Tel Aviv University study reported 1,129 anti-Semitic incidents last year, ranging from vandalism and arson against Jewish targets to beatings of Jews. The figure, up from 559 incidents the previous year, was the highest since the survey began more than 20 years ago.

The steepest increase in anti-Semitic violence occurred in western Europe, especially Britain and France, where protests and anger by Muslim residents boiled over after Israel's invasion of Gaza in December 2008, said the report, compiled by the university's Stephen Roth Institute for the Study of Contemporary Anti-Semitism and Racism.

The Israeli invasion, launched in response to years of Palestinian rocket attacks, killed some 1,400 Palestinians, including hundreds of civilians, according to local officials and human rights groups. Thirteen Israelis also died in the fighting.

Dina Porat, the report's editor, said protests against the war often led to incitement, which in turn erupted into physical violence. "The political goals are imbued with anti-Jewish sentiment, equations of Jews to Nazis," she said.

She said the study tracked only instances of physical violence against Jewish targets. "Verbal violence is violence of course, but we don't count it. Violence we regard as physical, and here we have clear indications."

For the first time in the report's history, incidents carried out by Muslims eclipsed those by right-wing extremists in cases where the perpetrator was identified, the report said.

The United States registered only a slight increase, according to the study.

Moshe Kantor, president of the European Jewish Congress, which sponsors the report, said that the rise of anti-Semitic sentiment in western Europe can be blamed on forces outside the region.

"This new phenomenon is financed and organized by pro-Islamic, pro-terrorist organizations and states," Kantor said.

The report came as the world marked the Holocaust Remembrance Day.

In Canada, Prime Minister Stephen Harper issued a statement Sunday, saying the hatred and bigotry that led to the Holocaust still lurks in our world.

"Anti-Semitic crimes in Canada, including recent vandalism at Jewish schools in Calgary, Montreal and Toronto, demonstrate the continuing need for both action and education," he said.

"They remind us of the necessity of standing firm and taking decisive action against the evils of anti-Semitism. Our government is doing both while taking steps to ensure that the lessons of the Holocaust are remembered."

-- With files from The Canadian Press. 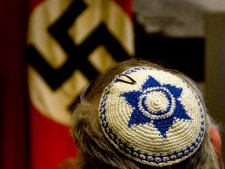 A Jewish man looks at exhibit showing the Nazi flag, during a visit at Yad Vashem Holocaust Memorial in Jerusalem Sunday, April 11, 2010. The annual Israeli memorial day for the 6 million Jews killed in the Holocaust of World War II begins at sundown Sunday. (AP Photo/Sebastian Scheiner)