A record-breaking heat wave has enveloped Canada's most populous corridor with a mixture of scorching sun and stifling haze that has proven fatal farther south.

At least two deaths were reported Tuesday in the United States, which has also seen thermometers surge to record levels in some cities.

The humid hell that extended to much of the East Coast had health officials urging people to adopt sluggish tendencies and find a nice, cool place to chill out.

The heat was intense enough to prompt the cancellation of the RCMP's Musical Ride, scheduled for Wednesday and Thursday in Ottawa, after a veterinarian ruled it unsafe for the horses to perform.

Officials in Quebec offered three simple rules to live by: stay cool indoors, keep hydrated, take it easy on the physical activity. The heat wave and smog are supposed to last all week.

Temperatures for southern Ontario and Quebec are expected to remain in the low 30s this week but, with the humidity, it'll feel like the low 40s or hotter.

"This is not just an American heat wave or a Canadian heat wave. It's really roasting the eastern half of the continent," David Phillips of Environment Canada said from Toronto.

"It's probably more tropical (here) than it is in the tropics."

It was enough to send people seeking a little cold comfort to any air-conditioned building they could find.

In Toronto, people largely chose to get off the streets. Sam Brown, who doesn't have air conditioning at home, found it at the city's Eaton Centre.

"It feels like a desert. You come outside and it's like, 'Whoa,' you can't even breathe," Brown said, adding that he prefers the sticky heat over a cold winter day.

"We complain too much. It's too cold, too hot, it's never good enough," he said.

Consider the plight of other cities Tuesday.

In Dubai, the muggy emirate on the Arabian peninsula, it was 33C with the heat index at 44C -- and that was just after midnight. Tuesday's high had been 41C.

Canadian troops in Kandahar are grappling with highs this week of 35C, 37C, 39C and 38C.

Closer to home, in California, the mercury topped out at 46C in the infamous Death Valley on Tuesday.

At least two deaths were attributed to the scorcher earlier this week: a 92-year-old woman was found dead in her Philadelphia home and a homeless woman's body was found next to a car in Detroit.

Most Canadians were taking the heat in stride, with many making a beeline for some coastline. The Chown family celebrated son Felix's first birthday near the beach in Toronto, under the shade of a tree.

"As long as he stays hydrated he doesn't get heatstroke," said dad Aaron, pointing to a large bottle of water.

"We follow the shade and catch a little breeze when we can," he said.

In Quebec, health officials warned people to take it easy, stay in a cool place and drink plenty of fluids.

"Your body is normally 37C and, with the exposure to the high temperatures, your thermal regulation system will try to cool down your body," said Dr. Luc Lefebvre, head of the emergency measures unit with the Montreal Public Health Authority.

"If it's not working, you're going to have symptoms."

Some of those symptoms could include headaches, vomiting and nausea. If body temperature rises further, the possible effects are confusion, co-ordination problems, loss of consciousness and even death.

Lefebvre said some groups are more at risk -- notably seniors who often overdress and don't drink enough water. But following those three simple rules will suffice for almost everybody, he added.

In Toronto, authorities have opened up cooling centres for people needing a place to get out of the sun.

In Montreal, swimming pools and children's splash pads are also staying open longer in some areas.

The extreme heat is being accompanied by smog, and by warnings from public health officials for people to take care -- especially if they have cardiac or respiratory problems.

"The warmer the weather, the more ripe we are to see elevated smog."

Hydro officials in both Ontario and Quebec say they are expecting higher-than-usual electricity consumption today, but nothing they can't handle.

A spokesperson for the province's Independent Electricity System Operator said Ontario would be able to handle the demand, which was expected to peak at around 6 p.m.

About 240,000 people in Toronto were left without power for air conditioners for up to three-and-a-half hours on Monday afternoon after an explosion and fire at a transformer station.

Meanwhile, in Quebec, the consumption figures pale in comparison to the winter months.

Cote said a deep January or February chill might require 36,000 megawatts of power.

By comparison, the current heat wave or incidents of extreme heat might require 22,000 megawatts daily. 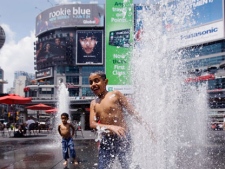 Brothers Mohammed, centre, Yousef, left, and Abdullrahman Othman try to cool off while playing in the water fountains at Dundas Square in Toronto Monday, July 5, 2010. (Darren Calabrese / THE CANADIAN PRESS)