TORONTO - Research In Motion's reputation for reliability took another bruising Wednesday, as technical glitches affecting millions of BlackBerrys around the world spread to Canada, giving users another reason to switch to competitors.

The BlackBerry outage -- the biggest in the company's history -- even reached Prime Minister Stephen Harper's office.

Andrew MacDougall, spokesman for the prime minister, took to social networking site Twitter on Wednesday and tweeted: "Am being impacted by RIM/Berry service outage -- please call if you need to reach me."

Outages for RIM's (TSX:RIM) instant messaging service, email and browsing started at the beginning of the week in Europe and then spread to the Middle East, Africa and hit Canada on Wednesday.

The list of affected regions also included areas of South America, as well as Asian markets including Hong Kong, Japan, Singapore and India.

"It's a huge embarrassment for a company that has built its reputation on the notion of service and reliability and when all else fails your BlackBerry will still work," said Michael Gartenberg, director of research at U.S.-based technology firm Gartner Inc.

The problem began as a technical failure in Europe, but snowballed into a global problem as messages sent from outside of Europe to the continent while the system was down piled up undelivered and clogged the network, the Waterloo, Ont., company said.

"What it's looking like is that over time, that backlog has built and has started impacting those other systems," said David Yach, RIM's chief technology officer.

Yach said RIM is working around the clock to send the undelivered messages, noting that the problem isn't related to a security breach.

"All of the email will be delivered. We will not be dropping any email messages," Yach told a webcast to discuss the outages.

"Our priority is to get the service up and running because at the end of the day that's what's going to make our customers happy is to have their BlackBerrys working again," Yach said.

"We are working to resolve the situation as quickly as possible and we apologize to our customers for any inconvenience," RIM said in a statement.

However, an apology didn't seem to be good enough for the government of Colombia, which reportedly asked RIM to compensate users affected by the glitches.

RIM's last outage was in December 2009 and it also experienced an outage in 2008.

Gartenberg said the outage comes at a key time for the company.

"It's coming at a time when RIM is facing increasing competition from companies like Google and Apple and Microsoft, all launching new products," Gartenberg said from New York.

RIM has been losing ground in the hyper-competitive North American market to Apple and Android devices in recent years. Although it's still a leader in the business market, Apple has been making inroads with corporations.

Technology analyst Troy Crandall said he expects the outages to have more of an effect in the corporate market.

"It just kind of puts the thought in people's heads -- might it be time for a switch?"

However Crandall also noted it won't help attitudes among younger users who have taken to BlackBerry Messenger for real-time chatting.

In addition to the service outages, RIM acknowledged on its website www.blackberry.com there was a BBM-related hoax making the rounds.

While the company didn't spell out what the hoax was, at least one independent website that tracks the mobile device industry reported that users of BlackBerry Messenger were encouraged to forward the fake message to all their contacts as a way to help RIM fix the overload caused by the outage.

RIM's website said hoaxes are an industrywide issue and any type of device could be used to persuade users to forward messages.

"RIM recommends that users simply ignore the message and do not forward it, since this would only serve to expand the reach of the hoax message," the company's website said.

"Days like this tick consumers and enterprise off against this company," said Doradla, who's based in Chicago but was in India and affected by the outage.

"People who are on the fringes and are thinking about going away from RIM, days like this clearly motivate them to do that," he said from Bangalore, India.

Doradla noted that RIM's servers handle all email and BlackBerry instant messages and that means it has to spend millions to keep pace with the growing volume of data.

RIM has about 70 million BlackBerry subscribers around the world and most of them also use the BlackBerry instant messaging service, creating a non-stop flow of messages.

Canadian carriers said some of their BlackBerry customers were affected.

"Our customers are concerned but after explaining what's going on, they understand the situation," said Telus spokeswoman A.J. Gratton. "It's too soon for us to see any significant move from one type of device to another."

Bell (TSX:BCE) spokesman Mark Langton said BlackBerry email service was back on line, but there would be delays as queued messages get cleared.

"Affected users are experiencing delays in sending and receiving emails," Langton said in an email.

Adding to RIM's woes, Toronto-based investor Jaguar Financial Corp. renewed its call this week for a shakeup of RIM's management and either the sale or split-up of the company.

RIM earns revenue from both the sale of its smartphones and a monthly fee subscribers pay to use its secure email services and instant messaging capabilities, which means users switching to other phones could eat away at its profits.

"You can see by the absence of market reaction that the brand is already in disrepair already," he said from San Francisco. 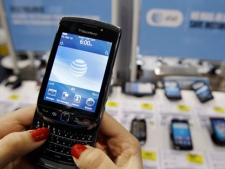 In this March 22, 2011 photo, a customer uses a Research In Motion Blackberry Torch. (AP Photo/Paul Sakuma)