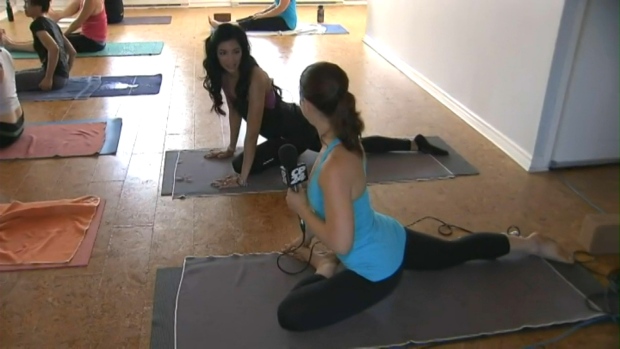 A Toronto yoga teacher has put herself at the forefront of the fight against mental illness, partnering up with CAMH and organizing free seminars and yoga classes for people who find it hard to cope.

Michael Malone was bipolar and he became overwhelmed by the illness in August 2012. His family didn’t know his condition until after he died but they sensed that whatever he was suffering from was debilitating.

After his death, Linda Malone took a two-month break from teaching at the studio. When she came back to work, everyone offered kind words and asked how she was holding up. Though the easiest thing would have been to tell them she’s fine, those words didn’t ring true to her and so she told the truth.

“I’d say, ‘Today is not a good day.’ It was short but honest,” she said. And when she openly talked about suffering from Post Traumatic Stress Disorder, that’s when she noticed a change. People were soon opening up to her about their own struggles, confessing to feelings they were afraid to speak up about before.

“If I’m saying out loud that I’m not ok, then maybe it means something to others,” she said. “I realized, wow, we really need to have this conversation.”

Blu Matter Project was born out of the desire to give people who live with depression a space where they could perhaps find peace, either through informative seminars with top mental health advocates or through the practice of yoga.

It helps people break their usual train of dark thoughts with new patterns of positive thinking and new coping skills for when they feel out of control.

For example, Malone points to a person’s physical reaction to anxiety – quickened breath and racing thoughts. Fighting our body’s natural fight or flight response and managing those symptoms is key to taking control of the situation, she said.

“When you’re stressed, your biological reaction doesn’t differentiate between coming face-to-face with a bear or just regular stress,” Malone explained.

Consciously slowing your breath and purposely changing your thoughts can help, she said.

“I’m not suggesting you can think your way out of schizophrenia,” Malone said. “I’m talking about a break in the routine. The more we do something, the more we develop the adaptive ability to become more effective. There are countless studies that show that when the brain is surrounded by new experiences, it improves overall cognition.”

The teachers who lead the classes are also mindful to the challenges people in the class face. Child’s pose, a position where a person rests on their knees, crouched forward with their head tucked in, is considered a resting stance, but to some, it’s considered a position that makes them feel more vulnerable than they’d like. The classes are tailored to make sure that everyone in the session has an option that makes them feel safe.

Blu Matter has grown with success in the last two years and continues to expand its reach. Malone is adding more seminars to the list of upcoming events and is hosting more events that will bring people together socially.

“Community, mindfulness and education are at the core of Blu Matter’s values,” she said.

Her work in mental health is her tribute to her brother Michael as well as his legacy.

“His memory is not wasted,” she said. “There are beautiful lessons learned, things that make you realize what’s important.”