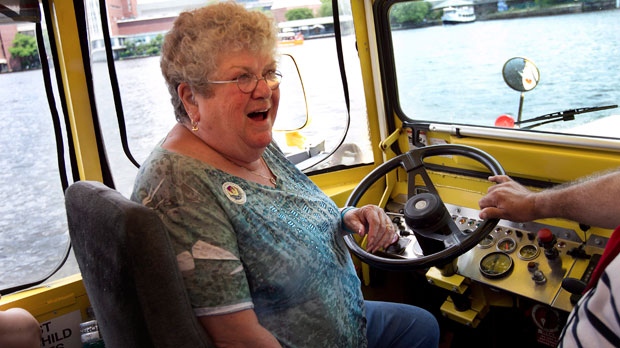 Bus monitor Karen Klein, of Greece, N.Y., sits at the controls of a duck boat, an amphibious tourism vehicle, while floating in the Charles River, in Boston, Thursday, June 28, 2012. (AP Photo/Steven Senne)

GREECE, N.Y. -- An American school bus monitor who was verbally abused and tormented by students is now mulling over what to do with her embarrassment of riches.

A video showing Karen Klein, 68, being tormented and insulted on the bus ended up online and caught the eye of Max Sidirov of Toronto. He launched a fundraising drive on Indiegogo.com to pay for a holiday.

Sidirov, 25, set the initial fundraising target for $5,000 dollars, but donors kicked in $703,873 by the time his campaign wrapped up Friday night.

"I still don't know how that happened," said Sidirov.

Klein is now must decide what she'll do with the money.

"I want to save some, I want to invest in some things to make it grow, and donate to a couple of groups that I have in mind," she said in a phone call from her home in Rochester, N.Y.

Klein has a granddaughter who has Down syndrome and a grandson with autism, and has some organizations that work with special needs kids in mind.

Klein said she would like to be able to thank everyone personally for their support, but with numbers climbing into the thousands it's just not possible.

"Hopefully everybody out there knows how much I appreciate everything," she said.

Sidirov has made the trip to New York a number of times to visit Klein and her family.

"We chat on the phone, we send each other texts, we're good friends now," said Sidirov.

"I just hope that the money makes her happy," said Sidirov. "It really warms my heart to know that there's so many great people out there."

He is pleased with how the campaign has been able to raise awareness about bullying.

Klein is also thinking about where she'll go on vacation.

"I've been to Hawaii, I loved Hawaii," she said.

Klein and her family are planning to take a cruise too, but in the short term, she'll be doing some travelling in the continental U.S.

She's looking forward to a trip to see Tim McGraw in concert. The country singer wanted to meet with Klein but she wasn't able to make it. His staff sent Klein his itinerary and told her to pick a city. "I picked New Orleans because I've never been down there," she said.

The invitations have continued to pour in, and Klein has a packed itinerary for August. "This is really unbelievable that people really want me to go and talk or see people," said Klein. "It makes me feel good."

Klein has been overwhelmed with the outpouring of support from the public.

"They thanked me, and they said that they loved me and they were so glad that it happened to get this out so far away, you know it was the whole world basically," said Klein. "That made me feel even better than money."

Sidirov said last month that the campaign might be able to give Klein an early retirement, and it looks like that is now going to happen. Klein confirmed that she will not be returning to work in the fall.

"I have to go do all my paperwork so I don't have to work anymore, so I can retire," said Klein.