KANDAHAR, Afghanistan - A Canadian soldier has been killed in a powerful roadside bomb blast while on foot patrol in a volatile community southwest of Kandahar City.

The attack that killed Pte. Tyler William Todd, 26, happened early Sunday near the community of Belanday, about eight kilometres outside of the provincial capital.

Brig.-Gen. Dan Menard, the commander of Canadian troops in Afghanistan, says Todd was on a routine patrol to learn more about the people of the village and their needs when the bombing happened.

"His enthusiasm and strong will were inspirational to his platoon," Menard said in a prepared statement. "He was doing what he loved to do -- being a soldier operating alongside friends."

A statement from the prime minister's office said another Canadian soldier had been injured in the same incident. The Canadian military didn't confirm the injury as it no longer releases information on those wounded on the battlefield.

"The thoughts of an entire country are with you in this most difficult time," he said in a statement. "I also hope for the quick and full recovery of the other Canadian soldier injured in the same incident."

Harper added that Canada's commitment to creating a better future for the Afghan people would not be diminished by the incident.

"Our participation in this United Nations-mandated mission is a true reflection of Canadian values. Canada is working to help those most in need while striving to build a strong and independent Afghanistan that will not serve as a base for international terrorism," he said.

"Canada is grateful for Private Tyler William Todd's sacrifice. We are all saddened by this loss."

Todd would have been only weeks away from completing a six month tour. His death comes as the U.S. pours thousands of reinforcements into Kandahar province and NATO continues planning for a spring offensive.

The Belanday area is a known transit route for Taliban fighters, who use the arid grape and wheat fields as staging areas for attacks into the city itself.

It has also become an increasingly troublesome region.

The explosion on Sunday happened in Dand district, the same region where journalist Michelle Lang and four Canadian soldiers were killed on Dec. 30, 2009.

It was also just east of where a roadside bomb in the town of Nakhoney claimed the life of 44-year-old Sgt. John Faught in January.

Canadian and Afghan troops fought their way through Nakhoney and the surrounding area in a major operation last November. Just the mention of the town causes seasoned soldiers with the battle group to wince.

Villagers claimed they had chased the Taliban out of the area.

NATO commanders said following Operation Sher (Lion) II that they were confident most of the approaches to the city were secure. They were ready to focus their attention on far-flung western parts of the volatile district, where Canadian soldiers have fought repeated engagements with the Taliban.

Menard took no questions from reporters about the incident, but instead praised Todd as a person.

"Tyler was a practical joker; he would often hide rocks and candies in the other soldier's bed spaces," he said. "He never allowed the small things to get to him and was often the rock that other soldiers could depend on."

"Our thoughts are with the family, loved ones and colleagues of the courageous and generous Private Tyler William Todd, and we would like to offer them our most sincere condolences and deepest sympathy," she said in a statement.

"His noble sacrifice will remain forever etched in our memory."

"Our Canadian Forces members ... face an enemy that will go to any length to try to undermine any progress made. The courage demonstrated by Pte. Todd speaks volumes to his dedication to our country and to this mission," MacKay said in a statement.

Todd was from Kitchener, Ont., but based in Edmonton with the 1st Battalion, Princess Patricia's Canadian Light Infantry.

His death brings to 142 the number of Canadian soldiers killed since the Afghan mission began in 2002. The last solder to pass away, Cpl. Darren Fitzpatrick, was mortally wounded March 6, but died in an Edmonton hospital two weeks later.

Meanwhile, also on Sunday, four Afghan civilians were killed and 16 others wounded during a mine clearing operation in Kandahar's Dand district.

Afghan Police are investigating and suggested that insurgents may have been responsible because there were two explosions. The first blast left dead and wounded at the site and a second explosion occurred when a rescue team arrived, a tactic often used by insurgents. 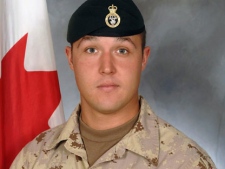 Canadian Pte. Tyler William Todd is shown in a military handout photo. Todd was killed in a powerful roadside bomb blast while on foot patrol in a volatile community southwest of Kandahar City early Sunday. (THE CANADIAN PRESS/HO-Department of National Defence)