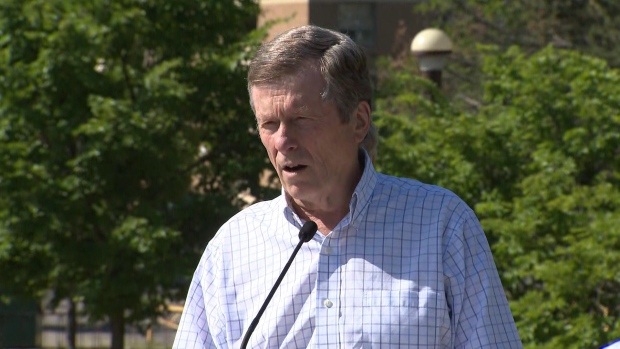 The City of Toronto is launching a series of free drop-in activities for youth as it seeks to fill the gap created by the cancellation of a wide-swath of summer recreational programming.

The city normally offers hundreds of different day camps and summer recreational programs but it had to cancel all of it back in May due to concerns related to the COVID-19 pandemic.

Since then it has created a modified summer day camp program known as “CampTO” but due to the need to ensure physical distancing there are thousands fewer spaces available for Toronto youth; not to mention less choice as the programming at all of the reimagined camps is identical.

During a press conference outside Oakdale Community Centre on Friday morning, Mayor John Tory announced that the city hopes to partially fill the gap in programming this summer through the launch of two new free summer drop-in programs for youth at up to 100 local parks.

The first program, ParksPlayTO will be for any child aged 12 and under who are accompanied by a caretaker. Tory said that recreational staff will lead participants in a range of activities, including nature exploring, gardening, active games, arts and crafts, family fitness, storytelling and music circles.

The second program, Summer in the 6IX, will be for young people between the ages of 13 and 24. Tory said that programming for the older group will be more broad and will include dance, fitness, ecology and sports as well as leadership and employment.

“It has been a very challenging year for young people. We often talk about their parents and others but we forget sometimes that kids can find it challenging too. They don’t have the structure in their life of going to school, seeing their friends or even being able to play some of the games because even now as we reopen the city there is restrictions placed on how sports fields can be used,” he said. “This program is meant to help address that and make sure that kids do have something that they can do this summer.”

The city elected not to hire more than 8,000 recreation workers this summer after it cancelled most of its planned programs.

Tory, however, said that the new drop-in programs will create employment opportunities for some young people.

As for the programming itself, he said that public health considerations will be top of mind with enhanced sanitization procedures and a policy that will require all participants to leave their contact information in the event that it is need for the purposes of contact tracing.

“All of these programs we have had to redesign and launch later in the summer, the delay in part is because we have had to take into account new considerations,” he said.

Both programs will begin on July 20 and run for the rest of the summer.

Further information can be accessed on the city’s website.