Plans are in the works to build an aquarium at the base of the CN Tower.

Canada Lands, the federal agency which owns the property, is proposing to build a 14,000 square metre, three-storey tank that would be about 50 per cent larger than one in Vancouver.

It would be built by Ripley Entertainment and feature everything from jellyfish to sharks. A second retail building would be built just to the west of the tower. The Toronto and East York community council will vote on rezoning the land involved next week.

Final approval from city council would be required for the project to go ahead. 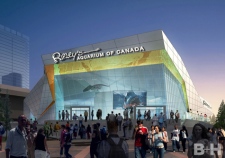 Renderings of the proposed aquarium at the foot of the CN Tower. (B+H Architects)