Costly full-day kindergarten going ahead despite record $25B deficit 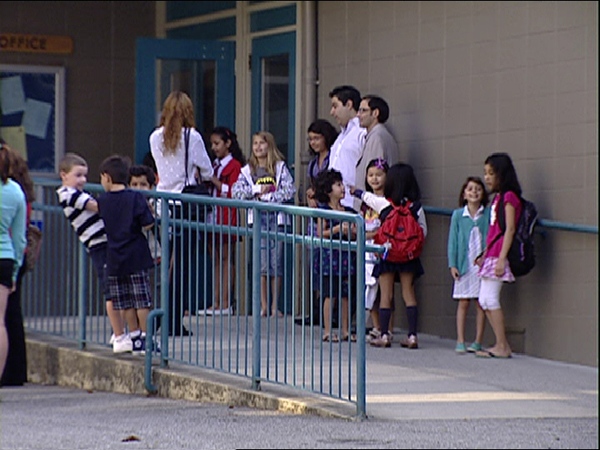 New test results show 30 percent of B.C. kids entering kindergarten are not prepared according to their own teachers and the numbers are getting worse. (CTV/File)

TORONTO - Ontario will move ahead with a massive and costly program to offer full-day kindergarten for all four- and five-year-olds despite an unprecedented $25-billion deficit this year, Premier Dalton McGuinty said Tuesday.

Even though Ontario is expecting to hemorrhage red ink for years with no end in sight, it's "essential" that the province invest in the $1.5-billion-a-year program to build a stronger workforce down the road, he said.

"Parents everywhere are the same," McGuinty said. "All we want is for our children to grow up and be the very best that they might be, to achieve their greatest potential."

Moving forward with all-day kindergarten -- billed as a North American first -- may require cuts in other spending areas, McGuinty warned.

"It will. It will in due course. That's not the announcement I'm making here today though."

His government "can't have everything," but it will continue to support education and health care, he added.

McGuinty's staff couldn't provide a breakdown of how much will be spent on all-day kindergarten over the next five years, but the government has set aside $500 million over two years to start it up.

About 35,000 kids will be able to enrol in full-day kindergarten next September, which McGuinty promised will expand to 50,000 kids in 2011, and to all eligible children in 2015 at an estimated cost of $1.5 billion a year.

That puts Ontario behind British Columbia, which plans to offer full-day kindergarten to all of its five-year-olds by 2011.

About 18,000 of the over 240,000 junior and senior kindergarten students in Ontario are already enrolled in full-day learning at a handful of francophone and Catholic schools, which fund the programs by diverting money from other sources, provincial officials said.

Under the new plan, teachers will take the lead but also work with early educators in the classroom, said Education Minister Kathleen Wynne.

Teachers' unions had balked at the idea of working alongside staff with "lower credentials." Their exact roles and responsibilities have yet to be determined, Wynne said.

Class sizes will also increase under the new program, but there will be enough funding for two adults for every 26 children, McGuinty said. The current provincial cap for primary classes is 20 to 23 students.

If parents want childcare before 9 a.m. and after 3:30 p.m, they'll have to pay a fee, and the kids will be supervised by an early childhood educator.

The school boards that will offer the program will be announced early in the new year. Priority will be given to low-income neighbourhoods, as well as those that have available space and have the greatest need for the program.

It's easy to "cobble together" a program just to say you're doing something to keep kids busy, McGuinty said.

"The programming that we've settled on is not the least expensive program, but it speaks to our desire to have in place a quality program," he said.

Ontario has part-day kindergarten for four-year-olds, but school is not mandatory until Grade 1.

Early education, which started out as a Liberal campaign promise, will likely ignite more sparks as Ontario heads into the 2011 election.

A recent poll suggested that support is slipping for the Liberals amid recent spending scandals at eHealth Ontario and the Ontario Lottery and Gaming Corp., as well as the $24.7-billion deficit -- the largest in the province's history.

Both the Liberals and Opposition Conservatives appear to be spoiling for a fight over all-day kindergarten, with McGuinty warning that unless he's in charge, a new group of chop-happy Tories will slash the very programs that parents need most.

Opposition Leader Tim Hudak wouldn't say if he would scrap full-day kindergarten, but said the province can't afford another big-spend program when it's in such bad financial shape.

"Dalton McGuinty has emptied the bank and now he's kicked off his Hallmark campaign promise until after the next election," he said.

"I mean, my two-year-old daughter is probably going to be thinking about going to prom by the time he unrolls this program."

Charles Pascal, the government's early learning adviser, had estimated that the fully implemented early learning program could cost about $1 billion and recommended phasing it in over three years.

His June report recommended sweeping changes that include expanding paid parental leave to 400 days, and combining daycare and kindergarten into a single full-day program from 7:30 a.m. to 6 p.m. to make life easier for parents and their children.

It also said that children who have attended full-day programs before Grade 1 fare better academically and have better social skills.

About 28 per cent of kids that show up for Grade 1 are significantly behind their peers, Pascal said Tuesday.

"This is not a frill," he added. "This is preventative maintenance."

Early learning also benefits the economy, Pascal said. The latest research suggests that for every dollar that's put into early education, there's a return of between $2 and $17.

"We're talking about billions and billions of dollars in return," he said.

"This isn't pie-in-the-sky stuff. The only thing that prevents us from acting on this return on investment, frankly, is political courage."