Toronto city council members could face off this week as at least one councilor attempts to relax the city's ban on ball hockey.

Coun. Josh Matlow has submitted a motion that would amend Toronto's all-out street hockey ban. The motion is scheduled to be heard Tuesday.

Matlow wants the bylaw to be changed so parents can apply for a permit that would allow kids to play ball hockey on their street.

Matlow's motion follows a request from councillors Doug Ford and Michael Thompson for city staff to look into relaxing the bylaw.

Currently, anyone caught playing hockey on the street could be slapped with a $55 fine, although the bylaw has never been enforced.

Opponents argue the ban goes against Canada's hockey spirit and it should be lifted on streets with less traffic. 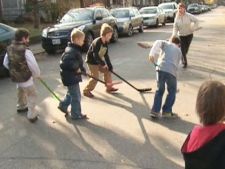 City councillors are voting on an amendment to Toronto's street hockey ban May 16, 2011.