Journalist and filmmaker Sebastian Junger will pay tribute to friend and colleague Tim Hetherington at a special screening of their war documentary, "Restrepo," this weekend.

Hetherington, a celebrated war photographer, was killed in Libya earlier this month while on assignment.

Junger will host a Q&A session after a special showing of their Oscar-nominated film, in which he and Hetherington were embedded with U.S. soldiers stationed at an Afghan outpost.

The charity event is being hosted by the documentary film festival Hot Docs, National Geographic Films and Realscreen magazine.

All proceeds will go to charitable organizations selected by Hetherington's family in his memory.

The screening is being held Saturday at TIFF Bell Lightbox.

Memories and condolences can be posted at timhetherington.org. 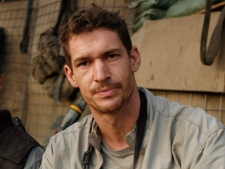 In this 2007 image, photographer Tim Hetherington is shown at the Restrepo outpost in the Korengal Valley, Afghanistan, during the filming of their documentary "Restrepo." Hetherington was killed in Misrata, Libya Wednesday April 20, 2011, while covering battles between rebels and Libyan government forces . (AP Photo/Outpost Films, Tim Hetherington, File)