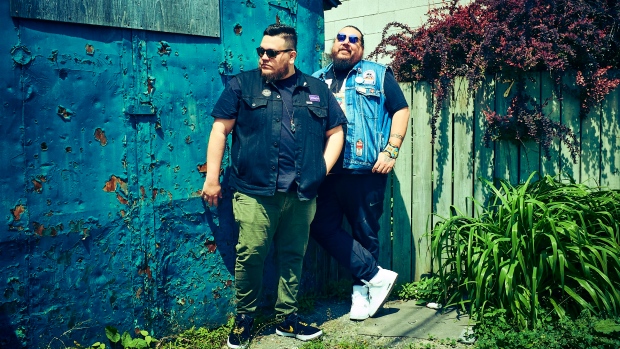 A Tribe Called Red members Tim (2oolman) Hill (left) and Ehren (Bear Witness) are shown in a handout photo. A Tribe Called Red has released a free song in support of the Indigenous-led protests against the Costal GasLink pipeline. THE CANADIAN PRESS/HO-Matt Barnes MANDATORY CREDIT

TORONTO - A Tribe Called Red have released a free song in support of the Indigenous-led protests involving the Coastal GasLink pipeline.

The electronic producer duo say their track “Land Back” is a testament to using music as a mechanism to encourage unity and help give others a voice.

The collaboration with Boogey the Beat and Chippewa Travellers is available for free download on A Tribe Called Red's Soundcloud page.

The performers say the song can be used by anyone working to promote Indigenous land sovereignty and “a true nation-to-nation discussion between the Indigenous nations of Turtle Island and our Canadian settlers.”

The three-time Juno Award winners say the giveaway was inspired by multidisciplinary artist Whess Harman, a member of the Carrier Wei'at Nation, who has used various artistic creations to help encourage the land rights movement.

They say Harman also designed the “Land Back” patch on the cover artwork for the song, which is being sold to help raise money for the legal fund of the Unist'ot'en camp that has been set up near the pipeline work site.

A Tribe Called Red, which is comprised of Tim (2oolman) Hill and Ehren (Bear Witness) Thomas, issued a statement about the ongoing protests.

“We oppose the invasion of sovereign Indigenous lands by the RCMP and the Coastal GasLink pipeline,” they wrote in part.

“We stand with the Wet'suwet'en people and their hereditary chiefs. We stand with all the people working to support their fight... Until our Canadians are willing to treat the Indigenous nations of this land with the respect due, a sovereign people's reconciliation will remain an empty gesture.”