Atwood's 'The Testaments' returns to Gilead, with hype 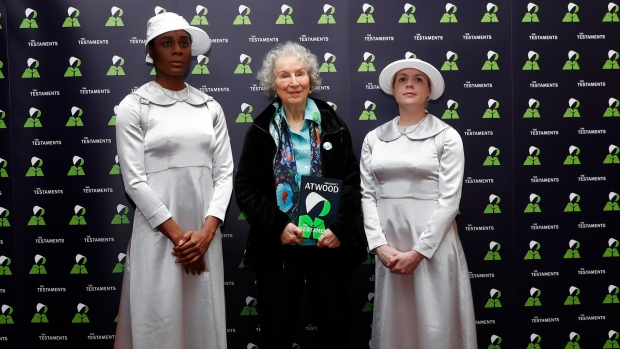 Canadian author Margaret Atwood poses with two models for a photograph during a press conference at the British Library to launch her new book 'The Testaments' in London, Tuesday, Sept. 10, 2019. (AP Photo/Alastair Grant)

LONDON -- Margaret Atwood is often asked if her new novel "The Testaments," a follow-up to "The Handmaid's Tale," is set in a dystopian world.

Atwood says several U.S. states have enacted laws limiting women's reproductive control that she likens to Gilead, the theocratic republic of the books.

The 79-year-old writer is unfazed.

Atwood said, "I think this kind of thing can be quite ruinous for a 35-year-old. Because where do you go from there? In my case, I think we know the answer."