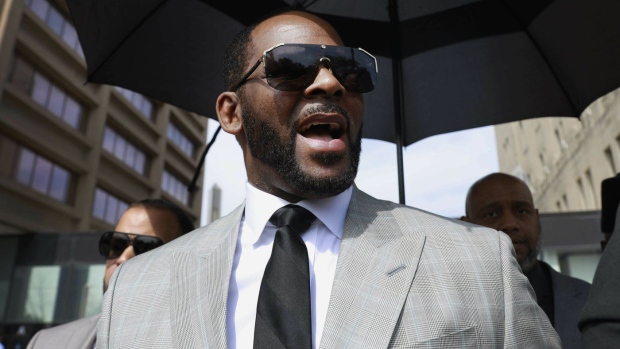 CHICAGO (AP) - A music writer who spent decades raising awareness about sexual misconduct allegations against R. Kelly is fighting a bid to force him to testify at the R&B singer's federal trial on child pornography and trial-fixing charges, according to a Tuesday court filing.

Lawyers for Jim DeRogatis, who in 2019 released his book “Soulless: The Case Against R. Kelly,” invoked constitutional and other protections for the press in asking Judge Harry Leinenweber to rule that DeRogatis need not testify.

DeRogatis was a reporter for the Chicago Sun-Times in the early 2000s when he anonymously received a video that he gave to police that helped lead to Kelly's child pornography trial in 2008 in state court. Video evidence entered at that 2008 trial is also part of the current trial.

Lawyers for Kelly's former business manager, Derrel McDavid, who with Kelly is charged with a conspiracy to rig that 2008 child pornography trial, subpoenaed DeRogatis to testify. Kelly's lawyers also would be able to question DeRogatis if he takes the stand.

Kelly, who was acquitted in the 2008 state trial, also faces charges of enticing minors for sex at the federal trial in the Grammy Award winner's hometown. Both McDavid and Kelly also face pornography charges.

The trial was scheduled to resume Wednesday - after the Labor Day holiday and after the unexpected closure of the courthouse Tuesday due to “operational issues.” Leinenweber is expected to decide Wednesday morning about whether DeRogatis, who co-hosts the public radio show “Sound Opinions,” will have to testify.

Prosecutors rested last week and the defense could wrap up by the end of this week. The trial follows a separate federal trial in New York, where Kelly, 55, was sentenced to 30 years in June.

It's not clear what defense lawyers at Kelly's current trial would ask DeRogatis. But in filings and public statements they raised chain-of-custody questions about how video evidence got into police hands. They also say there were indications DeRogatis shared a draft of his book about Kelly with prosecutors.

Tuesday's filing, also submitted on behalf of The New Yorker magazine, for whom DeRogatis writes, points to rulings by a Chicago-based U.S. appellate court that forcing reporters to testify in cases they've covered should be done rarely and only when there are no alternatives to introducing the same information.

The filing says a Chicago police detective already testified for the prosecution to explain the chain of custody of video evidence. It says another key government witness, using the pseudonym “Jane” also testified at she and Kelly were the people in several video excerpts.

Calling the outspoken Kelly critic to testify could amount to “harassment or intimidation,” given that there are other ways to work the same facts into evidence, the filing argues. It also cites reports that a window at the DeRogatis family home was shot out after the Sun-Times reported on Kelly.

Four years ago, Kelly released a song called “I Admit,” in which he sought to call out the writer, singing: “To Jim DeRogatis, whatever your name is/You been tryna destroy me for 25 whole years.” Kelly described himself as “so falsely accused” but added, “I admit I have made some mistakes/And I have some imperfect ways.”

DeRogatis took the stand at Kelly's 2008 trial, but refused to answer questions, citing an Illinois law that shields reporters' rights, as well the U.S. Constitution's free press rights and right against self-incrimination.