Which stars are coming to TIFF this year?

And the headlining names aren't limited to the world of film.

Music stars expected to attend the annual film marathon include members of Arcade Fire, Yo-Yo Ma, rapper-turned-actor Common and even beloved Rolling Stones guitarist Keith Richards, who's the subject of a documentary screening during the festival.

TIFF organizers have also announced that Julianne Moore and Salma Hayek, comedian Sarah Silverman and "Mad Men" creator Matthew Weiner will discuss their careers with audiences at a series of intimate Q-and-A sessions dubbed "In Conversation With."

Weiner heads to the festival on the heels of wrapping up his critically acclaimed TV drama "Mad Men," and will deliver a live commentary during a screening of the final episode, "The Wheel."

"We got in touch with him once we knew 'Mad Men' would be wrapping up," said the festival's artistic director Cameron Bailey.

"Having that (conversation) in conjunction with the launch of the Primetime section is a great combination to really show that we're deep into television."

This year, the festival rolls out its inaugural Primetime section, which showcases a number of episodic TV series and specials alongside conversations with show creators.

Moore's new projects include the TIFF drama "Freeheld," opposite Ellen Page and Michael Shannon, while Hayek has several films set for release this year and next, including the festival selection "Septembers of Shiraz."

Silverman stars in the drama "I Smile Back," also heading to the festival. 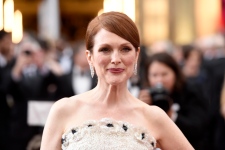 Julianne Moore arrives at the Oscars on Sunday, Feb. 22, 2015, at the Dolby Theatre in Los Angeles. (Chris Pizzello/Invision/AP)

Actress Rachel McAdams arrives at the premiere for "To The Wonder" during the Toronto International Film Festival on Monday Sept. 10, 2012 in Toronto. (Photo by Evan Agostini/Invision/AP)