Elon Musk is an odd choice for SNL host. Here's why he was picked 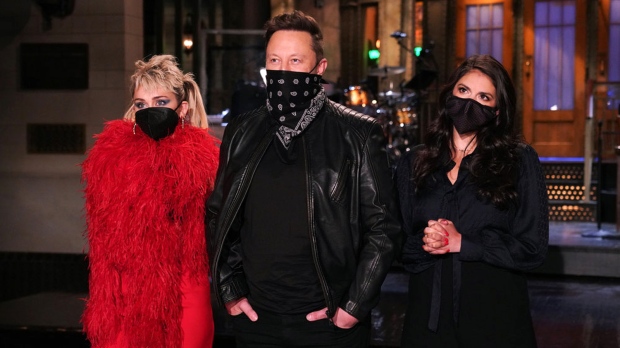 "Saturday Night Live" has made some odd host picks over its history. The long-running NBC variety show's Studio 8H stage has been graced by the likes of Ralph Nader, Steve Forbes, Rudy Giuliani, George Steinbrenner and, famously, Donald Trump.

That off-kilter tradition continues Saturday when Elon Musk, the eccentric tech billionaire, will host the show. Miley Cyrus will join him as musical guest.

Musk is a surprising choice for the show given that "SNL" is not known for picking hosts from the tech or business world, usually sticking to celebrities and comedians. Having one of the wealthiest people on the planet on the show — and a controversial one at that — has raised some eyebrows.

But, according to James Andrew Miller, author of "Live From New York, the Complete, Uncensored History of Saturday Night Live," the appearance makes sense because "SNL" is not so much an entertainment show as it is a cultural one.

And Musk, for better or worse, is definitely a part of our culture.

"'SNL' has had a tradition of going outside of movie openings and television events and other predictable hosting invitations," Miller said. "It's picked hosts from all walks of life and different people from all parts of the culture."

Miller added that it's one reason the show has stayed relevant through the years.

That's why the Musk pick makes sense from a viewership perspective: His selection gets people talking, and that's certainly been the case since Musk was announced as host a few weeks ago. Musk could bring in viewers who typically don't watch the show.

"It gives an opportunity for people to see somebody who is very much in the public eye, and very much a big blip on the cultural, financial and technological radars, and see them in a different way," Miller said.

Musk's selection has been a bit bumpy for "SNL" given how he he has courted controversy in the past. For example, Musk downplayed the risks of Covid-19 in an interview with the New York Times in September, saying he would not take a COVID vaccine.

Musk's comments via his Twitter account have also put him in hot water in the past. Then there was the time he smoked weed and unsheathed a Samurai sword on Joe Rogan's podcast in 2018 — a move that upset shareholders and prompted the departures of two high-level executives.

So, the CEO's unpredictable personality, plus the very live nature of "SNL," could go a lot of ways. He even hinted at his "wild card" personality during a promo for the show, promising to be "good-ish" since it's the Mother's Day show.

After Musk was announced as host, some of "SNL's" own cast members like Bowen Yang and Andrew Dismuke headed to Instagram to express their displeasure. By contrast, Pete Davidson expressed his interest in having Musk on.

"I'm really excited, man. I'm going to ask him for, like, a Tesla or some s***," Davidson told Seth Meyers on "Late Night with Seth Meyers" this week. "I don't know why people are freaking out. They're like, 'Oh, I can't believe that Elon Musk is hosting!' And I'm like, 'The guy that makes the earth better kinda and makes cool things and sends people to Mars?'"

Miller pointed out that some people "will be fascinated by this," and some "will be disgusted by it." That's likely just fine with long-time executive producer Lorne Michaels.

"From the very beginning, Lorne has made a point of not pandering. He doesn't wet his finger, hold it up in the air and try to guess what people want," Miller said. "The show isn't afraid of controversy."

So will Musk be a good host? He's no stranger to being in front of the camera. He's had cameos in films like Marvel's "Iron Man 2," TV shows like "The Simpsons," and been in several episodes of "South Park."

Tune in Saturday night to see if that translates to "SNL."