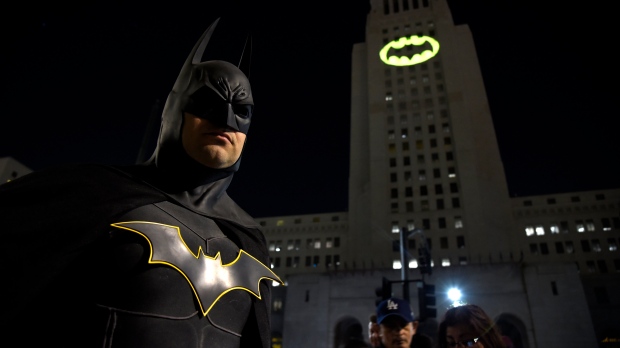 FILE - In this June 15, 2017 file photo, Tony Bradshaw, of Los Angeles, dressed as Batman, poses in front of a Bat-Signal projected onto City Hall during a tribute to "Batman" star Adam West in Los Angeles. The night sky all over the world is lighting up Saturday, Sept. 21, 2019, with an illumination of the famed bat insignia to mark a special anniversary for Batman. DC Comics is carrying off a celebration of "Batman Day" to mark the 80th anniversary of the appearance of crimefighter Bruce Wayne and his masked hidden identity. Fan gatherings are planned all over the world. (Photo by Chris Pizzello/Invision/AP, File)

Montreal will have a bit of that Gotham City feel tonight as it shines the Bat-Signal to mark the 80th anniversary of iconic superhero Batman.

It is one of 13 cities worldwide - and the only Canadian one - to partake in the event which will see the famous insignia used by the fictional police force in the comics to summon the Dark Knight shine across the globe.

Montreal Mayor Valerie Plante said in a tweet not to worry if they notice the iconic symbol.

Locally, the signal will shine on Place Dupuis in downtown Montreal between 8 p.m. and midnight on what has become known as Batman Day - the third Saturday in September to honour Bruce Wayne and his caped crusader alter-ego, created by artist Bob Kane and writer Bill Finger in 1939.

It will light up at the Domino Sugar Refinery in New York City before making its final appearance in Los Angeles at City Hall.

“The Bat-Signal is easily one of the most recognizable images among all superhero iconography and this is going to be a remarkable sight as we transcend borders, languages and cultures to bring us all together with this single experience,” said Pam Lifford, president of Warner Bros. global brands and experiences, said in a statement earlier this week.

This report by The Canadian Press was first published Sept. 21, 2019.

- with files from Associated Press.