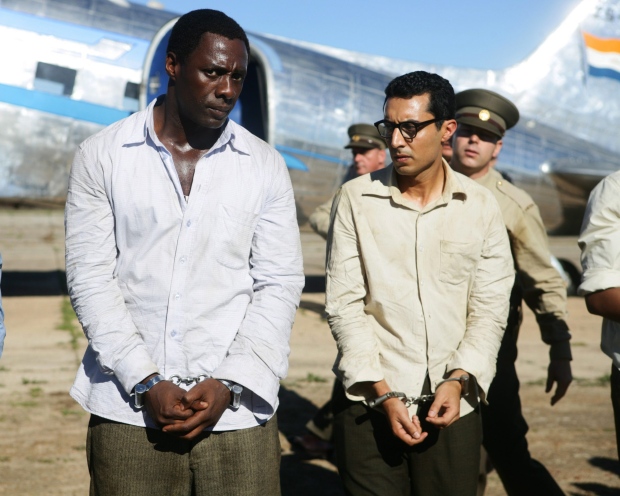 BEVERLY HILLS, Calif. -- When portraying South African revolutionary Nelson Mandela in the biopic, "Mandela: Long Walk to Freedom," Idris Elba embraced the harsh realities of Mandela's life and was determined to stay in character even when the cameras stopped rolling.

But the British actor knew his latest movie wouldn't be believable unless his fellow actors could deliver a performance as raw as his own -- so he pushed them to embrace uncomfortable realties, too.

Elba recounted one such instance when he was shooting scenes that focused on Mandela's 27 years in jail under white minority rule. During the filming, he sensed that a couple of white actors were struggling to portray the brutality in which Mandela was treated.

"They felt bad. ... I could see it in their eyes. I spoke to director (Justin Chadwick) and I said, 'I need these guys to go back to their core. If there is any sense of racism in them I need them to bring it up. If there is a black person that they don't like let me hear it and feel it,"' said Elba intently, leaning in during a recent interview in a dim Hollywood bar.

"That was important because it would come through in the performance and suddenly it becomes the biopic that's safe."

Safe would not be the word to describe Mandela the man, or the movie. While it shows him as the genial peacemaker that the world embraced when he was freed from prison and became South Africa's first black president, it also shows him as a fiery and flawed revolutionary who sought to abolish apartheid through any means necessary as leader as the African National Congress.

Chadwick called Idris brave and lauded his portrayal of Mandela.

"There are not many people who would step into the shoes of Mandela, particularly the way I was making the movie," he said. "There was no room for any untruth. When you are standing in front of thousands of people portraying their leader that they know so well you'd better be on it, and Idris was on it."

Elba did not have a chance to speak to the 95-year-old icon because of his failing health. But he drew on the mannerisms of his late father to help him with his interpretation of Mandela. He also spoke to a few of Mandela's daughters and his second wife, Winnie, who was also a powerful figure in the anti-apartheid movement.

"Winnie said it's all good to see a guy who is waving and smiling," said Elba. "But she needed to see the complex man."

Based on Mandela's autobiography, the film, which opens Friday, has been in the works for years. Denzel Washington was the original choice for the role.

"But at some point the DNA changed and it didn't work for him to do the film, so my name was thrown in that mix," said Elba. "In actuality it was really easy to get the job, but I didn't believe that I had gotten it."

Once reality set in, so did Elba's nerves. "I was like, 'Damn, do I have this performance in me?"' the 41-year-old actor said. "Everyone knows what Mandela looks like and sounds like and I'm not like any of that. It was a massive challenge, but it was time to grow up and really put my acting chops out there."

Amidst the stormy relationship between Mandela and his first wife, Evelyn Mase, Elba was determined to depict the man beyond the saint.

"I was surprised he was such a playboy," Elba added. "But he was one of the first black lawyers in Soweto (South Africa). This was sexy. We wanted be honest about that."

Bringing sexy to the role was likely the easiest part for Elba -- considered not only a brilliant actor, but a sex symbol as well. Even President Barack Obama joked about his lure with the ladies when the White House hosted a special screening of the film earlier this month, Elba recently recounted.

"He is hugely charismatic," said "Mandela" co-star Naomie Harris, who plays Winnie in the film. "He is one of those guys who comes in and lights up a room. He's very charming and makes everyone feel special."

Elba's magnetism is one reason why he's been so popular in recent years. Besides starring in the BBC series "Luther," he's played key roles in blockbusters like "Prometheus" and the "Thor" superhero series, as well as films such as "American Gangster."

"He's incredibly versatile," said "Thor: The Dark World" director Alan Taylor. "He brings an incredible weight to everything he does. There is so much behind his eyes."

Elba's breakthrough role was as Stringer Bell in the critically acclaimed "The Wire," playing the role of the ruthless Baltimore drug dealer so authentically that some found it hard to believe he is British.

Yet when Elba arrived in New York from London in his mid-20s, he struggled to find work with his British accent. He began hanging out in Brooklyn barbershops and at barbeques in the Bronx to pick up the dialect.

"I'd talk about basketball and be right in the mix," he said. "I peeled back American culture and tried to understand it. Every moment was about rehearsing."

Elba said he reached a turning point in his career when he was 29, and he found out he had a daughter on the way.

"Then it was sink or swim," Elba said about the birth of 11-year-old Isan, whom he calls his "foundation."

"That was the hardest time," he said. "There are all kinds of things that happen to you at that age as a man. You feel like you should be somewhere and you're not."

Luckily, things began to look up when he landed the gig on "The Wire."

There's no question he has arrived. Next up for Elba is "The Gunman," opposite Javier Bardem and Sean Penn, who recently presented Elba with a Britannia humanitarian award.

"There are moments in an actor's life where you feel like 'Wow I've made it,"' said Elba. "Sean Penn introducing me ... that was one of those moments."'